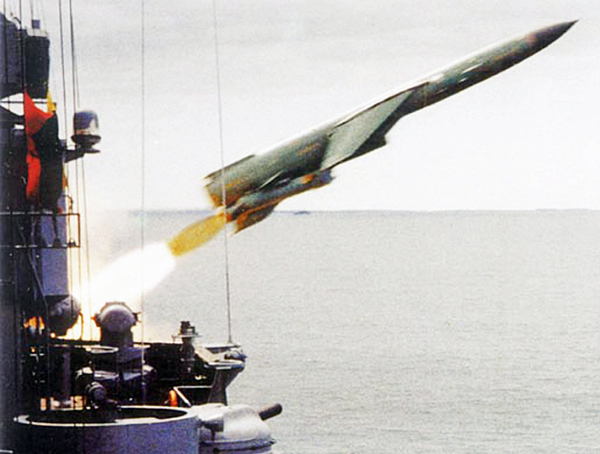 The SSC-1a SEPAL/ SS-N-3B SHADDOCK (P-35B) is a Surface-to-Surface anti-ship missile. It was supersonic and is powered by a turbojet with launch rocket booster. It has an inertial guidance with mid course correction via data link and a terminal active radar in conventional-armed versions. It carried a 1000 kg conventional warhead, and was designed to engage US aircraft carriers and their strike groups.

The P-35 SHADDOCK used programmable midcourse cruise profiles, at altitudes of 1300 ft, 13 kft or 23 kft AMSL, with radar guided terminal phase at an altitude of around 300 ft AMSL. The SHADDOCK used a complex guidance scheme, relying on datalink support during the midcourse profile, with the cruise altitude determined largely by the need to maintain line of sight to the launch vessel. After launch the Shaddock would climb to cruise altitude following datalink steering commands, with the missile’s position tracked using a beacon transponder by the Front Door/Front Piece radars (SSG/SSGN) or Scoop Pair (DDG/FFG). Once the Shaddock had line of sight to the target, a video datalink was engaged which relayed the seeker image to an operator on the launch vessel. The operator would select the intended target and use the datalink to lock the seeker on that target. The missile would then transition to terminal homing and descend to impact, losing datalink contact as it fell below the radio horizon.The lowest altitude midcourse profile reduced range to around 55 nautical miles. The P-6 Submarine-deployed Version of the P-35 (NATO designation SS-N-3A 'Shaddock) were deployed on Echo SSGN and Juliet SSGs required the submarines to surface belfore firing for up to 30 or more minutes until the Shaddock seekers lit up, a major vulnerability. The heavy dependence on datalinks also provided opportunities for jamming. A Modes for attacking coastal targets were included.

The SHADDOCK was initially deployed on Project 58 Grozny and then Project 1134 Sevastopol class cruisers, and by the mid 1960s also on the Kynda and Kresta I class guided-missile cruisers. The P-6 version was depolyed on Echo SSGN and Juliet SSGs, these submarines needing to surface in order to raise the large launchers. The P-35 SS-N-3b (SEPAL), also a radar-homing missile, was launched from Kynda and Kresta I class guided-missile cruisers


Note on Nomenclature: The nomenclature of the "SHADDOCK/SEPAL" missile shows the confusion in Western intellingence in the 1960. Both are virtually identical missiles. Further confusing the issue, the earlier varient, the P-5 was given the NATO desigator SS-N-3C Shaddock, while the subsequent P-35 versions were designated SS-N-3A and SS-N-3B.