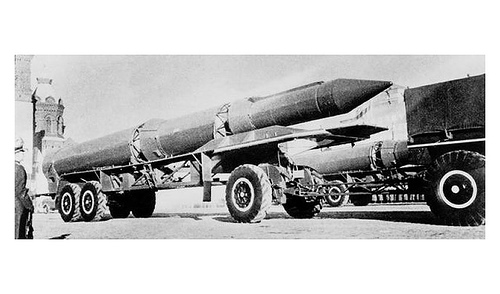 In 1960 work began on a solid-fuel ICBM, to overcome the many difficulties of liquid-fuel systems. Testing began in 1966 and the missile was ready in 1968. The SS-13 was a three-stage missile, all solid-fueled, with the stages separated by open lattice. Because of the missile’s weight, it was built in sections and assembled inside the silo. Once inside the silo, it could not be removed other than by launching or dismantling it.
Special, extremely-hardened silos around Yoshkar Ola were developed for the SS-13. They operated in a unique fashion; the bottom was partially flooded and the igniting first stage boiled the water into steam, which ejected the missile clear. The silos were unmanned and hermetically sealed; once inside the weapons required no human attention.
Although a success, the SS-13 was limited by it’s single warhead and only 60 were built. They were intended to be withdrawn in 1982, however an inspection showed them to be in remarkably good condition and they served on until 1996.