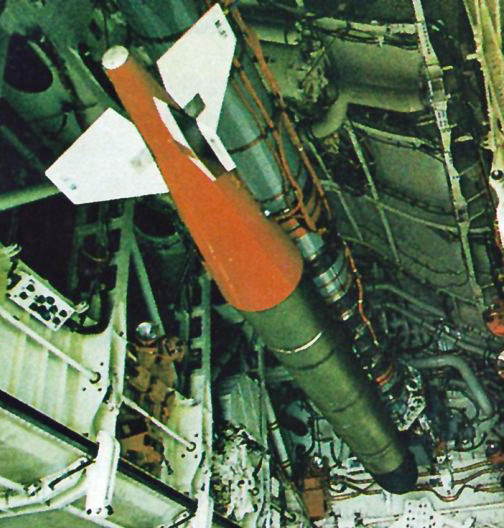 DETAILS: The Guided Bomb Unit-28 (GBU-28) bomb is designed to penetrate hardened targets before exploding, and is reported as being capable of penetrating 30 meters of earth or 6 meters of concrete. Warhead weight is approximately 286 kilograms. The weapon has a reported CEP of 9 meters.

NOTES: During Operation Desert Storm in early 1991, the USAF realized that deeply buried Iraqi bunkers could not be destroyed by the existing BLU-109/B penetrator warhead. To quickly field an operational weapon, engineers designed a very heavy guided bomb that when dropped from high altitude, used kinetic energy to penetrate to deep bunkers. To minimize development time, the bomb used off the shelf components, including the Paveway III laser guidance, modified for the aerodynamics of the new weapon. Surplus U.S. Army M201 howitzer gun barrels were used for the bomb casing, while the nose cone and the explosive came from the BLU-109/B. Developed only 11 days and operationally used two weeks after development began.

Only the initial batch of BLU-113/B warheads was made from howitzer gun barrels. Later purpose-build warheads were designated BLU-113A/B.