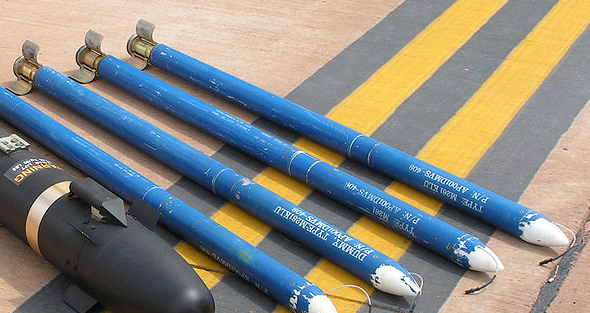 OVERVIEW:
The Hydra 70 rocket is a weapon derived from the 2.75 inch Mk 4/Mk 40 Folding-Fin Aerial Rocket developed by the United States Navy for use as a free-flight aerial rocket in the late 1940s.

DETAILS:
The Hydra 70 family of WAFAR (Wrap-Around Fin Aerial Rocket), based on the Mk 66 universal motor, was developed from the previous 2.75 inch Mk 40 motor-based folding fin aerial rocket. The propellant grain is longer and of a different formulation than that of the MK40/MK4, however, the stabilizing rod and igniter are essentially the same design. The MK66 motors have a substantially higher thrust, 1,335 pounds-force (5,940 N) (Mod 2/3) 1,415 pounds-force (6,290 N) (Mod 4), and a longer range than the older motors. To provide additional stability the four rocket nozzles are scarfed at an angle to impart a slight spin to the rocket during flight. The Mk 40 was used during the Korean and Vietnam wars, being used to provide close air support to ground forces from about 20 different firing platforms, both fixed-wing and armed helicopters. Today, the OH-58D(R) Kiowa Warrior and AH-64D Apache Longbow, as well as the Marine Corp's AH-1 Cobra, carry the Hydra rocket launcher standard on its weapon pylons.

The family of Hydra 70 (70 mm) 2.75 inch rockets perform a variety of functions. The war reserve unitary and cargo warheads are used for anti-materiel, anti-personnel, and suppression missions. The Hydra 70 family of folding-fin aerial rockets also includes smoke screening, illumination, and training warheads. Hydra 70 rockets are known mainly by either their warhead type or by the rocket motor designation, Mk 66 in US military service.