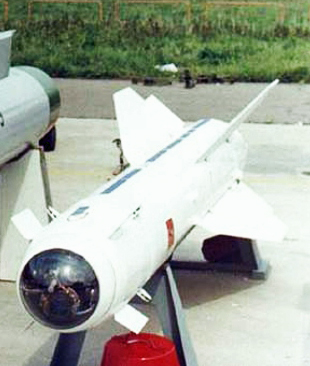 OVERVIEW: The AS-13 KINGBOLT (Kh-59 Ovod) is a subsonic, solid fuel, TV-guided, medium-range, air-to-surface missile with a 320 kg shaped charge HE warhead.

DETAILS: The AS-13 Kingbolt was developed to provide a precision standoff weapon capable of operating in heavily jammed environments. It is designed to engage large static ground targets such as bridges and buildings. After launch, the missile uses inertial guidance to navigate to a preset coordinate. At approximately 10 km from the target, the optical guidance system activates. An operator guides the missile to the target. The missile has a CEP of approximately 2 meters.