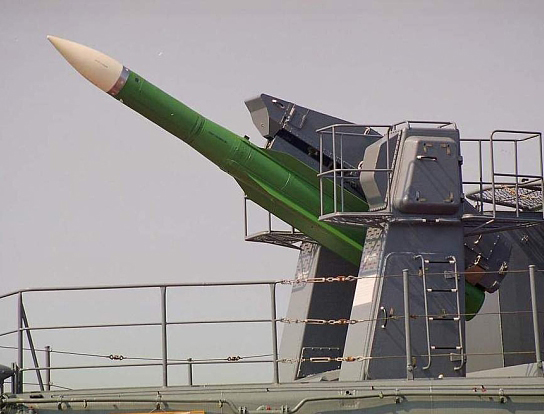 DETAILS: The GADFLY is guided using a combination of autopilot and proportional navigation. The missile uses inertial navigation and an autopilot to fly to a predetermined point, and then uses its semi-active radar to home in on reflected radar signals. The missile may also be able to receive command updates while in flight. It may also have an electro-optical sighting system for use in a severe jamming environment.

NOTES: The naval variant of the 9K37 "Buk", the 3S-90 "Uragan" uses the same 9M38 missile as the 9K37 though the launcher and associated guidance radars were exchanged for naval variants. It also carries the designation M-22. The Uragan utilizes the MR-750 Top Steer D/E band as a target acquisition radar (naval analogue of the 9S18 or 9S18M1) and the Front Dome H/I band tracking and engagement radar for illumination.