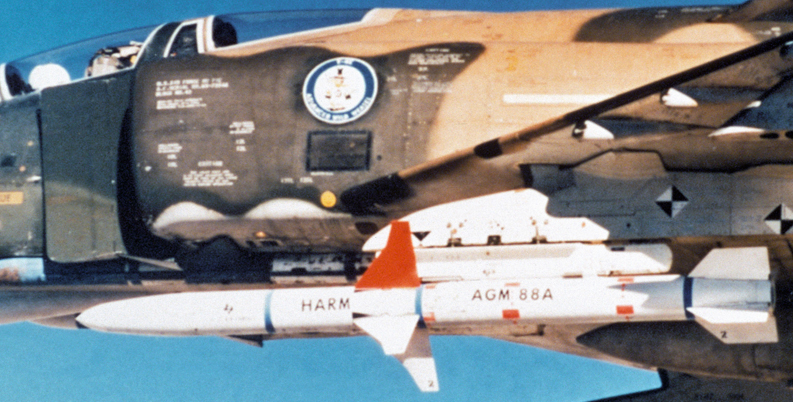 OVERVIEW:
The AGM-88 High-speed Anti-Radiation Missile (HARM) is a tactical, air-to-surface missile designed to home in on electronic transmissions coming from surface-to-air radar systems. It was originally developed by Texas Instruments as a replacement for the AGM-45 Shrike and AGM-78 Standard ARM system. Production was later taken over by Raytheon Corporation when it purchased the defense production business of Texas Instruments.

DETAILS:
The AGM-88 can detect, attack and destroy a radar antenna or transmitter with minimal aircrew input. The proportional guidance system that homes in on enemy radar emissions has a fixed antenna and seeker head in the missile's nose. A smokeless, solid-propellant, booster-sustainer rocket motor propels the missile at speeds over Mach 2. HARM, a U.S. Navy-led program, was initially integrated onto the A-6E, A-7 and F/A-18 and later onto the EA-6B. RDT&E for use on the F-14 was begun, but not completed. The USAF introduced HARM on the F-4G Wild Weasel and later on specialized F-16s equipped with the HARM Targeting System (HTS).