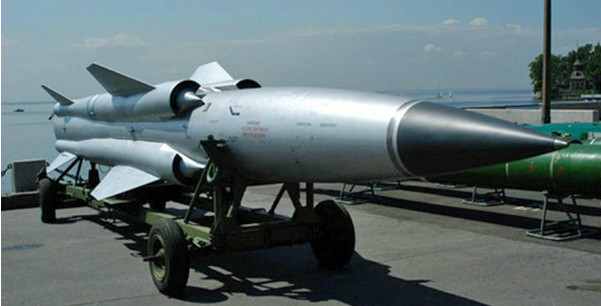 OVERVIEW: The AS-17 KRYPTON A (K-31A) is an air-launched, medium-range, high-supersonic, liquid-fuel, ramjet-powered, active pulsed X-band radar anti-ship missile (ASM). It carries a 94 kg HE warhead.

DETAILS: After launch, the AS-17 is accelerated by its solid-fuel rocket booster to a speed of Mach 1.8. Then the booster is discarded and the interior of the missile is converted into the combustion chamber for the missile's ramjet engine, accelerating the missile to a speed of almost Mach 4.50. The AS-17 uses inertial guidance for the mid-course phase. Between 7 and 20 km from the target, the AS-17 turns on its radar for terminal phase guidance. The AS-17 may use two different attack profiles. It may either use a dive profile, popping up before diving into the target or set to approach the target at approximately 200 meters altitude.