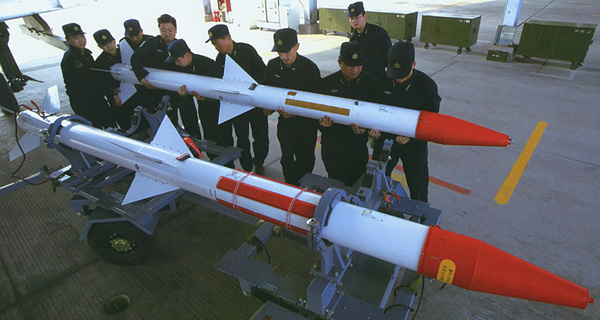 The PL-12 is an active radar, Beyond Visual Range (BVR) air-to-air supersonic solid fuel missile with laser/microwave proximity fusing. The PL-12's guidance is a mix of command guidance via a datalink, and its own inertial guidance which it uses before entering the active radar terminal guidance phase. The missile can also be launched to a pre-selected point using its inertial system, before switching on its own seeker for a terminal search. Over short ranges the missile can be launched in a 'fire-and-forget' mode using its own active seeker. The PL-12 also has a 'home-on-jam' mode, allowing it to passively track and engage an emitting target. The PL-12 has a 38+ g maneuvering limit. The PL-12 is roughly equivalent to the American AIM-120 A/B/C. It can be deployed by the Chengdu J-10, Shenyang J-8F, Shenyang J-11 and JF-17 combat aircraft.