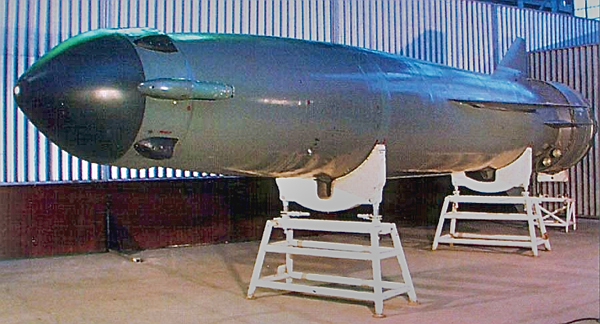 DETAILS: The control system initially obtains target data from a wide variety of platforms, including satellites, ships, airborne units and ECM receivers. On launch, the GRANIT's 7-ton weight is initially propelled with a booster. This is jettisoned after launch. The guidance system uses both inertial guidance as well as receiving target updates via datalink from third-party platforms. In the terminal phase, the missile uses active terminal guidance as well as anti-radar homing. It may also have an infrared homing capability. It is believed to be ESM and ECCM resistant.
The SHIPWRECK has a unique guidance mode when fired in salvo. One of the missiles climbs to a higher altitude and detects the target using its radar and datalinks this information to the command platform for further target designation. The missile appears to complete its attack using a high-angle dive instead of a low level attack, using primarily its active radar for terminal guidance.

NOTES: The missile entered service in late 1983, and remains in service aboard OSCAR II SSGN, the KIROV CGN and the ADMIRAL KUZNETSOV CV