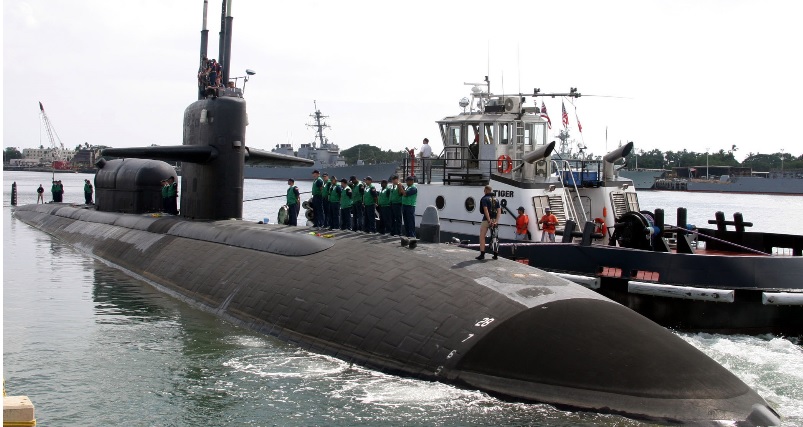 OVERVIEW: The Permit-class submarine, originally known as the Thresher class, was a class of nuclear-powered fast attack submarines in service with the United States Navy from the 1960s until 1994.

The first submarine commissioned in this class was the ill-fated Thresher, and so the class was known by her name. When Thresher was lost, the class took the name of the second ship in the class, Permit, and the SUBSAFE program began. SUBSAFE includes specific training of SUBSAFE quality assurance inspectors in the engine room crew, and tracks extremely detailed information about every component of a submarine's engine room that contacts seawater. Joints in any equipment carrying seawater must be welded (not brazed), and every hull penetration larger than a specified size can be quickly shut by a remote hydraulic mechanism.

DETAILS: The new class kept the proven S5W reactor plant from the immediately preceding Skipjacks, but were a radical change in many other ways. The Threshers had the large bow-mounted sonar and angled, amidships torpedo tubes pioneered by the Tullibee. Although it used the same HY-80 as the Skipjacks, the Threshers' pressure hulls were made using an improved process that extended test depth to 1,300 ft. The engineering spaces were also redesigned, with the turbines supported on "rafts" that were suspended from the hull on isolation mounts for acoustic quieting. The small sail of "Thresher" (the smallest fitted to an American SSN) compensated for the increased drag of the longer hull, giving Thresher a top speed of 33 knots, the same as the Skipjacks. Only Thresher was fitted with a five-bladed symmetric screw, very similar to the ones originally fitted to the "Skipjacks", which allowed her to reach this speed. According to Norman Friedman, in his book U.S. Submarines Since 1945: An Illustrated Design History, during trials of the Skipjack class, it was found that the propeller produced noise below cavitation depth. It was determined that the source of this noise, called blade-rate, was the blades of the screw vibrating when they hit the wake of the sail and control surfaces. This produced a noise that could carry for many miles and could be used by an enemy submarine to set up a firing solution because the frequency of blade-rate was directly related to the speed of the submarine (the RPM of the screw). The solution was to either make the screw smaller so it did not hit the wakes of the sail and control surfaces, which would cavitate more easily because of its increased speed, or have a large screw that gently interacted with these areas of disturbed water. The latter solution was chosen for all subsequent American SSNs. Permit and later submarines of this class had seven-bladed skewback screws, which reduced the problem of blade-rate, but reduced the submarines' top speed to 29-28 knots. Jack was designed with counter-rotating screws, each of which were smaller than the standard seven-bladed screw, as an alternative solution to the blade-rate problem.

ARMAMENT: The ships had their torpedo tubes moved to the middle of the hull. This made available the required large space in the bow for the BQQ-2, BQQ-5 in modernized boats, sonar system, a new and powerful detection low-frequency sensor. Initially armed with Mark 37 torpedoes, they later carried the improved Mark 48, the UGM-84 Harpoon (replacing four of the Mk-48s) and the UUM-44 SUBROC (replacing six Mk-48s, four after Harpoon was adopted). The maximum weapons load was 23 torpedoes/missiles or, theoretically 46 Mk-57, 60 or 67 mines. Or a mix of mines, torpedoes and missiles.

SERVICE: In service with the United States Navy from the 1960s until 1994. They replaced the Skipjack class. They were used primarily in the 1960s and 1970s, until replaced by the Sturgeon and Los Angeles classes.