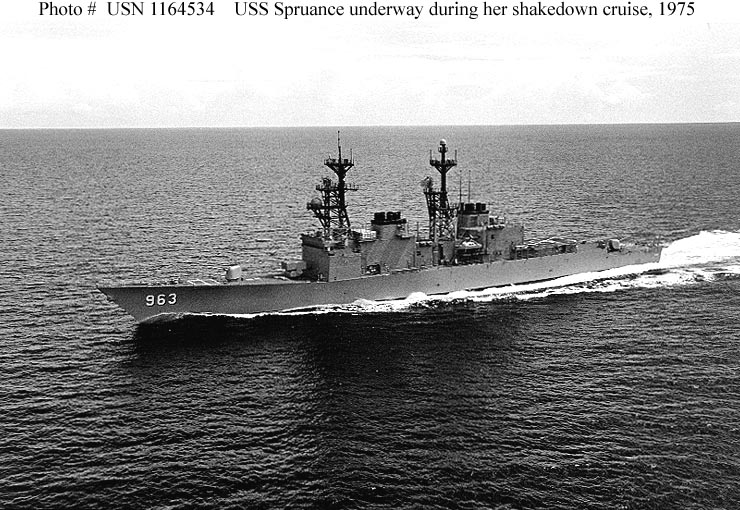 OVERVIEW: The Spruance-class destroyer was developed by the United States to replace a large number of World War II-built Allen M. Sumner class and Gearing class destroyers and was the primary destroyer built for the U.S. Navy during the 1970s.

First commissioned in 1975, the class was designed with gas-turbine propulsion, all-digital weapons systems, and automated 5-inch guns. Serving for three decades, the Spruance class was designed to escort a carrier group with a primary ASW mission, though in the 1990s 24 members of the class were upgraded with the Mark 41 Vertical Launching System (VLS) for the Tomahawk surface-to-surface missile.

DETAILS: The class was designed for anti-submarine warfare (ASW) with point defense anti-aircraft warfare (AAW) missiles; upgrades provided anti-ship and land attack capabilities. The ships were initially controversial, especially among members of the United States Congress who believed that their unimposing looks, with only two guns and an ASROC or Armored Box Launcher (ABL) missile launcher per ship implied that the vessels were weak compared to Soviet or older US designs which had more visible guns or launchers for the Standard medium range missiles. Despite the criticism they were successful in their intended ASW role.

The Spruances were comparable in size to cruisers (CG) under the U.S. Navy's hull classification symbol system. Despite their "DD" designation indicating gun destroyers, their primary armament was missiles. However the Spruance class as designed carried anti-aircraft missiles only sufficient for point defense, compared to other American destroyers designated as DDG which were designed to provide anti-aircraft warfare screening to the fleet while also having surface-to-surface capabilities. A major update in the 1990s would add a Vertical Launch Missile System (VLS) for the Tomahawk surface-to-surface missile which effectively made the modernized vessels up to DDG standard, although this class still lacked the stealth and missile capabilities of later Aegis equipped cruisers and destroyers.

The "Spru-cans" were the first large U.S. Navy ships to use gas turbine propulsion; they had four General Electric LM2500 gas turbines to generate about 80,000 horsepower (60 MW). This configuration (developed in the 1960s by the Royal Navy and known as COmbined Gas And Gas, or COGAG) was very successful and used on most subsequent U.S. warships. A slightly lengthened version of the hull was also used for the Ticonderoga-class cruisers. As of 2010, all US Navy surface combatants (except nuclear aircraft carriers and the LCS-1) use the LM2500 COGAG arrangement, usually with two such turbines per shaft.