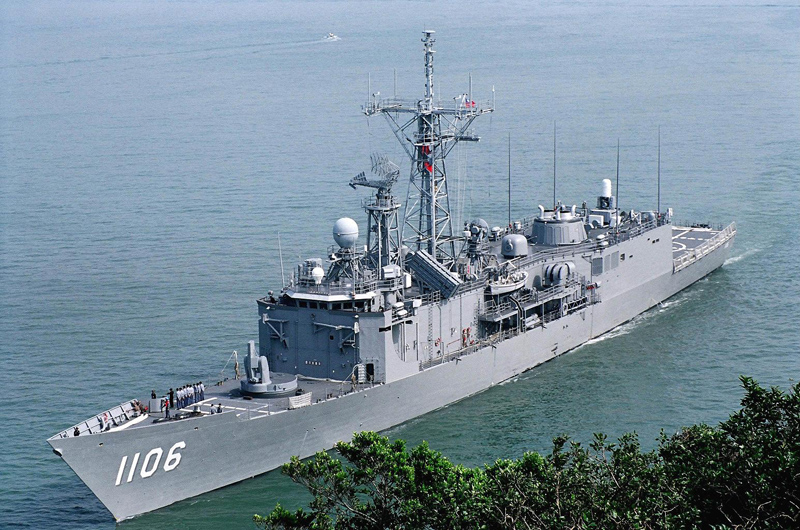 DETAILS: After reaching agreement with the U.S government, accordingly, in late 1989, the first Perry Class frigate order was placed with the ROC state-run China Shipbuilding Corp. (CSBC) to license build the first vessel. Construction started in January of 1990 and the first vessel was launched in October of 1991, and then commissioned 1101, Cheng Kung, in March of 1993. By November 1998 the first seven vessels were completed and commissioned.

By that time the ROCN desired AEGIS technology to counter what it viewed as a growing threat from the growing PLAN and the placment by the PLA of numerous tactical ballistic missiles across the straits from the island. Research was conducted into fitting a reduced capability AEGIS system onto the ROCN modified Perry design. Ultimately this proved both too costly and too limiting for the resulting AEGIS system on such a small vessel and was shelved. Finally, in 2001, the eighth and final vessel, 1110, Tian Dan, was laid down and then commissioned in 2004.

These vessels are strong multi-role frigates. They include an anti-air defense of 40 SM-1 MR missiles and can be data linked to vessels with that capability. In addition, they have seperate launchers for eight surface to surface missiles, as opposed to launching them off of the single armed launcher like stock U.S. Navy Perry class frigates did, thereby reserving all 40 standard missile slots for air defense The vessels are also armed with six torpedo tubes, a rapid firing, dual-purpose 76mm naval gun, a 20mm Phalanx CIWS, two 40mm bofors cannons, and two S-70 C Seahawk helicopters for ASW work. Their modern sensor suite is well suited for air, surface, and sub-surface search, acquisition and targeting.

The primary role of these frigate, in conjunction with other ROCN vessels, is sea control, particularly protecting the sea lanes and ROCN interests beyond the range of coastal aircraft.