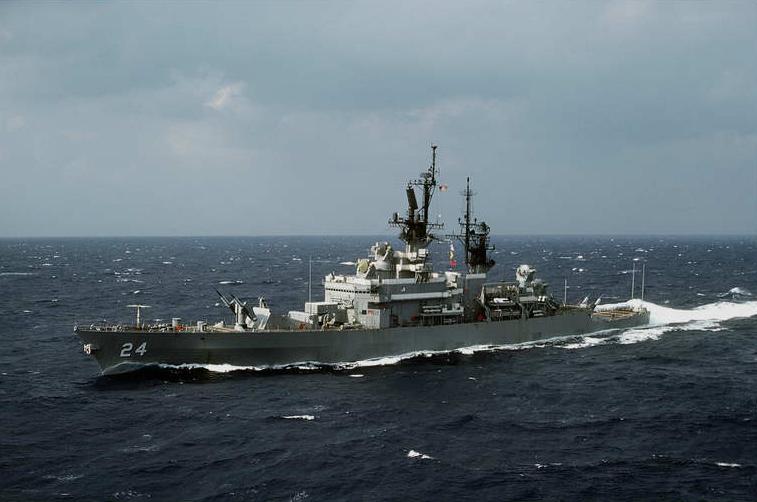 They were a new "double-ender" class fitted with Terrier (later Standard ER) missile launchers fore and aft, and the first and only frigate class designed without a main gun battery for shore bombardment or ship-vs-ship engagements - the gun armament was reduced in order to carry a larger missile load. One of the principal missions of these ships, like their predecessors the Farragut class, was to form part of the anti-air and antisubmarine screen for carrier task forces, while also controlling aircraft from the carrier by providing vectors to assigned targets.

The ships carried over the propulsion plant of the Farragut class, fitted into a longer hull designed with a knuckled "hurricane" bow that reduced plunging in a rough sea, thus keeping the forecastle dry as needed to operate the forward missile launcher. Other features included an expanded electrical plant and increased endurance. A major design innovation was the use of "macks" - a combined masts and stacks - on which the radars could be mounted without smoke interference.

All Leahy class ships were modernized again in the late 1980s New Threat Upgrade program. This program added advanced air search and track radars (AN/SPS-49 and AN/SPS-48E), updated targeting radars (AN/SPG-55), and combat direction systems. The upgrade included massive remodeling of the ship from food service space rehabilitation to a main propulsion system overhaul.[3] Entire systems were removed and replaced, for example the AN/SPS-40 air-search radar was replaced with the AN/SPS-49 air-search radar. The upgrade was also quite expensive and the ships didn't serve much longer after the modification. For example, USS Gridley (CG-21) received NTU in 1991 at a cost of $55 million, but was decommissioned in early 1994.