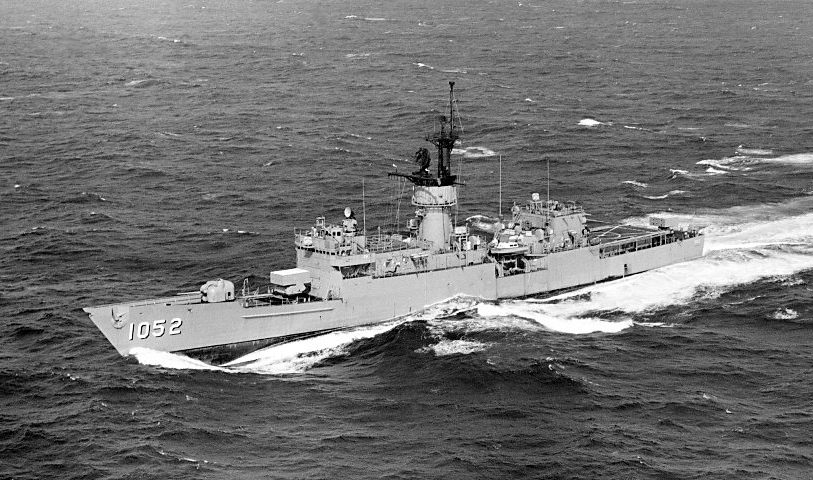 OVERVIEW: Knox-class frigates were United States Navy warships, originally laid down as ocean escorts (formerly called destroyer escorts), but were all re-designated as frigates on 30 June 1975 in the USN 1975 ship reclassification and their hull designation changed from DE to FF.

DETAILS: These ships were designed primarily as antisubmarine warfare (ASW) platforms. They each had AN/SQS-26 hull-mounted sonar manufactured by General Electric and capable of active echo ranging in the 3.2 kHz range. The active modes of operation included omni-directional, phased directional, bottom bounce, and convergence zone. The battle displays included A and B scans. There was also a "Unit 31" chart readout display capable of long-distance passive detection, often well beyond the ranges capable of the surface search radar. The frigates were also equipped with an AN/AQS-35V Independent Variable Depth Sonar (IVDS) manufactured by EDO Corporation of College Point, NY, operating actively in the 13 kHz range with dual Planned Position Indicator (PPI) battle displays. The IVDS' sonar transducers were packaged within a 2 ton fiberglass-enclosed "fish" containing the sonar array and a gyro-compass/sensor package launched by the massive 13V Hoist from a stern compartment, located just beneath the main deck, to depths of up to 600 feet (180 m). The IVDS could take advantage of water layer temperature conditions in close-range (less than 20,000 yards (18,290 m) submarine detection, tracking and fire-control.

ARMAMENT: They were equipped with one 5 in (127 mm) 54 caliber Mark 42 gun forward, an ASROC abaft the gun and forward of the bridge. Since they were single purpose platforms their surface defense capability was nominal; however they did mount Harpoon missiles and Mk-44/46 torpedoes. The aft weapons point was originally outfitted with Mk 25 basic point defense missile systems (BPDMS) for launching Sea Sparrow missiles. These were eventually refitted with a 20 millimetre Phalanx CIWS. They were equipped with a helicopter hangar aft.