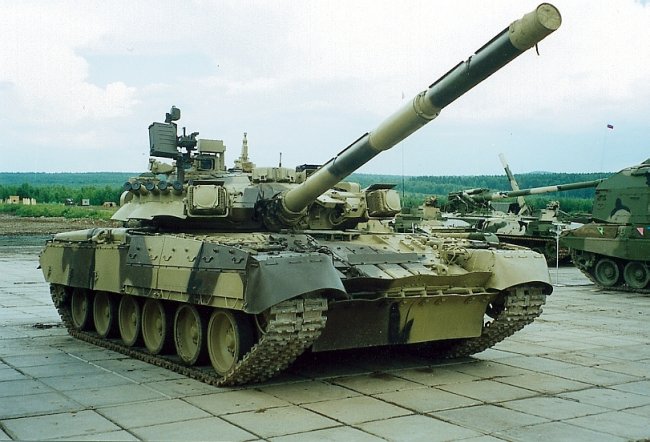 OVERVIEW: The T-80 was a Soviet medium tank/main battle tank.

DETAILS: The T-80 tank was developed as a refinement to the T-64. The T-80 features the same 125mm main gun, auto-loader, and ammunition stowage as the T-64, and many of the early experimental T-80 designs were born out of modified T-64's until after many upgrades the tank became the T-80. The T-80 was the first tank to be equipped with a gas-turbine engine, although some later designs of the T-80 have reverted to a diesel engine. The T-80 has evolved significantly over many upgrades and is now equipped with thermal imaging, composite armor and explosive reactive armor (ERA); passive and active countermeasures systems such as Shtora-1 (a passive laser ECM system) and Arena APS, which is an active countermeasure system designed to defeat top-down attack ATGM's. The T-80 can fire the AT-8 Songster ATGM through the main gun tube. The T-80 is operated by several nations but has not been exported as widespread as the T-72. In CMANO, The T-80 could also be used to represent the Ukrainian produced T-84, which is essentially a T-80 with a diesel engine and re-designed turret.