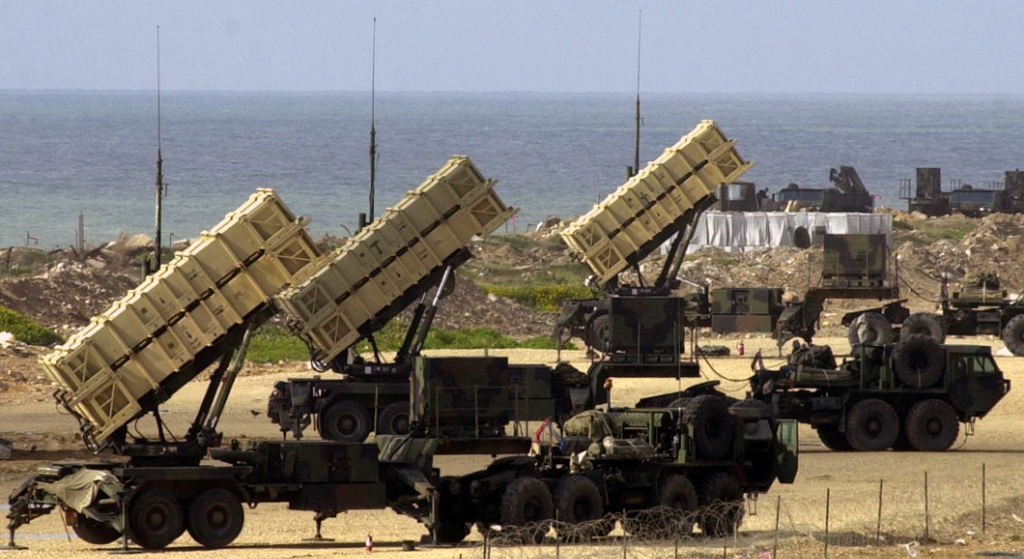 OVERVIEW: The MIM-104 Patriot is a surface-to-air missile (SAM) system, the primary of its kind used by the United States Army and several allied nations. It is manufactured by the U.S. defense contractor Raytheon and derives its name from the radar component of the weapon system. The AN/MPQ-53 at the heart of the system is known as the "Phased Array Tracking Radar to Intercept On Target" or the acronym PATRIOT. The Patriot System replaced the Nike Hercules system as the U.S. Army's primary High to Medium Air Defense (HIMAD) system, and replaced the MIM-23 Hawk system as the U.S. Army's medium tactical air defense system. In addition to these roles, Patriot has been given the function of the U.S. Army's anti-ballistic missile (ABM) system, which is now Patriot's primary mission.

Patriot uses an advanced aerial interceptor missile and high-performance radar systems. Patriot was developed at Redstone Arsenal in Huntsville, Alabama, which had previously developed the Safeguard ABM system and its component Spartan and hypersonic speed Sprint missiles. The symbol for Patriot is a drawing of a Revolutionary War-era Minuteman.

Patriot systems have been sold to Taiwan, Egypt, Germany, Greece, Israel, Japan, Kuwait, the Netherlands, Saudi Arabia, United Arab Emirates, Jordan and Spain. Poland hosts training rotations of a battery of U.S. Patriot launchers. It was first deployed in Morag in 24 May 2010 but has since been moved to Torun and Ustka. South Korea also purchased several second-hand Patriot systems from Germany after North Korea test-launched ballistic missiles to the Sea of Japan and proceeded with underground nuclear testing in 2006. On 4 December 2012, NATO authorized the deployment of Patriot missile launchers in Turkey to protect the country from missiles fired in the civil war in neighboring Syria.

The Patriot system is modular and highly mobile. A battery-sized element can be emplaced in less than 1 hour. All components, consisting of the fire control section (radar set, engagement control station, antenna mast group, electric power plant) and launchers, are truck- or trailer-mounted. The radar set and launchers (with missiles) are mounted on M860 semi-trailers, which are towed by M983 HEMTTs.

Missile reload is accomplished using a M985 GMT HEMTT truck with a Hiab crane on the back. This crane is larger than the standard Grove cranes found on regular M977 and M985 HEMTT cargo body trucks. This truck/ crane, called a Guided Missile Transporter (GMT), removes spent missile canisters from the launcher and then replaces them with fresh missiles. Because the crane nearly doubles the height of the HEMTT when not stowed, crews informally refer to it as the "scorpion tail." A standard M977 HEMTT with a regular-sized crane is sometimes referred to as the Large Repair Parts Transporter (LRPT).

The heart of the Patriot battery is the fire control section, consisting of the AN/MPQ-53 or -65 Radar Set, the AN/MSQ-104 Engagement Control Station (ECS), the OE-349 Antenna Mast Group (AMG), and the EPP-III Electric Power Plant. The system's missiles are transported on and launched from the M901 Launching Station, which can carry up to four PAC-2 missiles or up to sixteen PAC-3 missiles. A Patriot battalion is also equipped with the Information Coordination Central (ICC), a command station designed to coordinate the launches of a battalion and uplink Patriot to the JTIDS or MIDS network.