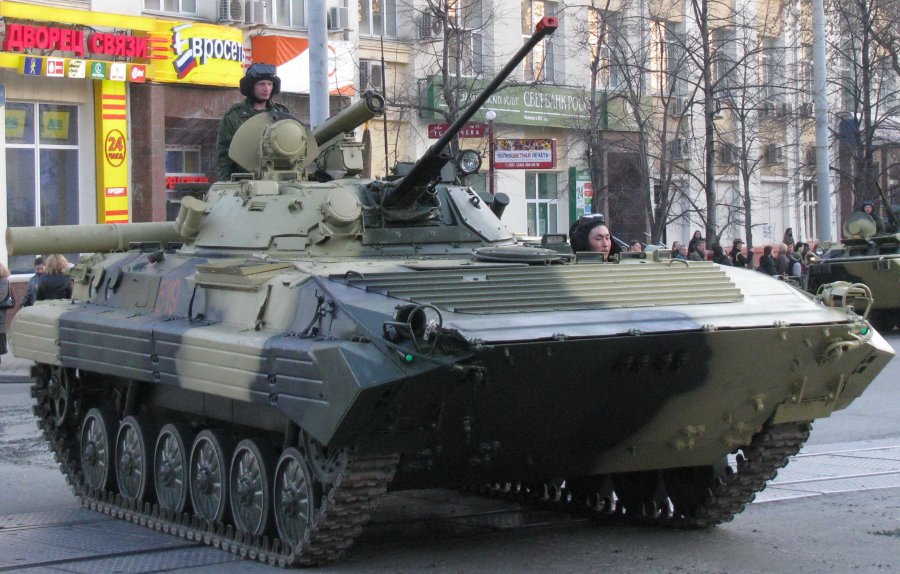 DETAILS: The BMP-2 was developed in the late 1970's as an improvement over the BMP-1 based on lessons learned during conflicts in the Middle East. It was first seen by the west in 1981 during the Soviet Invasion of Afghanistan. The BMP-2 is based on the BMP-1 and has a similar chassis, but it adds a larger two-man turret and has additional armor protection against 12.7mm rounds. Due to the larger turret, there is room for one less passenger (7 down from 8 of the BMP-1) and there are only two rear deck top hatches instead of the four hatches on the BMP-1. There is also one less rifle firing port on each side of the passenger compartment. The BMP-2 is armed with a 2A42 dual-feed 30mm autocannon, which is the same weapon used on the Mi-28 Havoc and Ka-50 Hokum helicopters as well as the BMD-2 & BMD-3 IFV's, and BTR-90 APC. The 2A42 has two rate-of-fire settings, either 200-300rpm or 550-800rpm. The BMP-2 also mounts a 9P135 ATGM launcher on top of the turret which is able to fire the AT-4 Spigot or AT-5 Spandrel anti-tank missiles.

NOTES: A Soviet Motorized Rifle Company (BMP) consists of 12 BMP's in three motorized rifle platoons of three BMP's each, a machine gun platoon of two BMP's, and a company headquarters of one BMP. In addition to vehicle mounted weapons, the motorized rifle company is equipped with small arms up to 7.62mm and each squad also carries an RPG-7 ATGL.