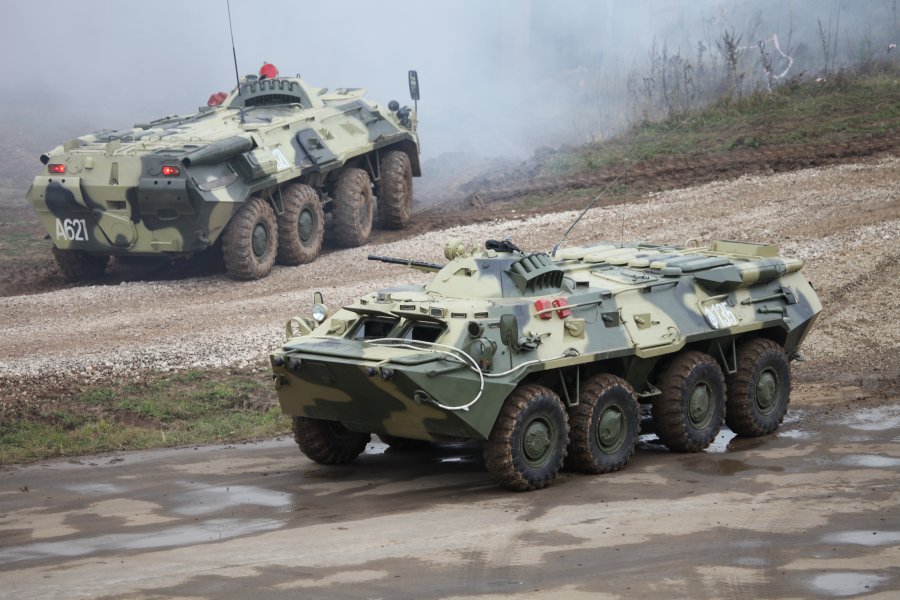 DETAILS: The BTR-80 APC was first seen by the West in 1986. It is a further improvement over the BTR-70, with the main feature being a single diesel engine instead of the twin gasoline engines of the BTR-60 and BTR-70. It also has an improved turret that allows the main weapon to be elevated nearly vertically, no doubt a lesson learned from fighting in the mountains of Afghanistan. The BTR-80 also has improved passenger egress over the BTR-70, with a two-piece door between the 2nd and 3rd axles. It is fully amphibious and is propelled in the water by a water jet at the rear of the vehicle. The baseline BTR-80 mounts a 14.5mm KPVT machine gun and a coaxial 7.62mm PKT machine gun.

NOTES: A Soviet Motorized Rifle Company (BTR) consists of 12 BTR's in three motorized rifle platoons of three BTR's each, a machine gun/anti-tank platoon of two BTR's, and a company headquarters of one BTR. In addition to vehicle mounted weapons, the motorized rifle company is equipped with small arms up to 7.62mm and each squad also carries an RPG-7 ATGL. The machine gun/anti-tank platoon is equipped with three AT-7 SAXHORN or AT-13 SAXHORN-2 ATGM. The BTR series APC's have been widely exported and modified by other operators. It saw extensive combat in the Soviet Invasion of Afghanistan. In Soviet service, the BTR-80 has seen several upgrades and modernization throughout its lifetime. There are different versions of the BTR-80 to include a recovery vehicle, ambulance, and several types of command and communications vehicles, and the BTR-80A which mounts a 30mm 2A72 autocannon in a different turret.