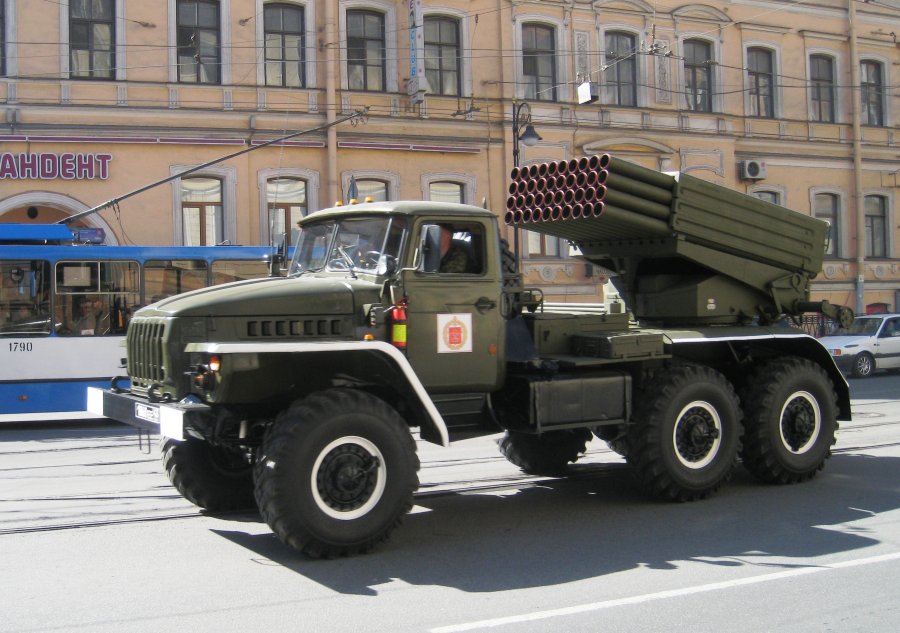 OVERVIEW: The BM-21 Grad (Grad is Russian for "Hail as in "Hailstorm") is a 122mm multiple-launch rocket system (MLRS).

DETAILS: The BM-21 Grad was developed in the early 1960's and was first seen by The West in 1964. It was intended to replace WWII era MLRS systems such as the highly successful "Katyusha" rocket launcher. The BM-21 is a 122mm MLRS with 40 rifled tubes stacked horizontally in four rows of ten tubes. The tubes are on a pivoting platform attached to the bed of an unarmored 6x6 truck chassis, which give it the ability to engage different targets without moving the vehicle. The tubes are sighted in similar fashion to laying a mortar using sights mounted on the left side of the launcher. The 40 rockets can be ripple fired in about 20 seconds. The launcher was initially mounted on a Ural 375D 6x6 truck and upgraded to a Ural 4320 6x6 in 1976, but the launcher is versatile enough that it could be mounted on many different types of truck. The rockets themselves are unguided ballistic rockets and are over nine feet long. They are capable of being fitted with a variety of longer range rocket motors and different types of warheads to include DPICM, chemical, and incendiary. The 40 tubes are loaded by hand and can be accomplished by an experienced crew in about ten minutes.

NOTES: In Soviet service a rocket launcher battalion consisting of three batteries of 6 BM-21 launchers is found in the artillery regiment of the motorized rifle and tank divisions. There is also a rocket launcher regiment of three battalions of BM-21 launchers organic to the combined arms army and tank army. The artillery division that is organic to the Soviet front may also have a rocket launcher brigade with 72 BM-21 in three 24-launcher battalions (four batteries of 6 launchers each). The BM-21 is still in service with the Russian Army and was widely exported in large numbers to many different operators and the launcher has been mounted on many different types of vehicle. Most recent use was during the 2008 War in South Ossetia.