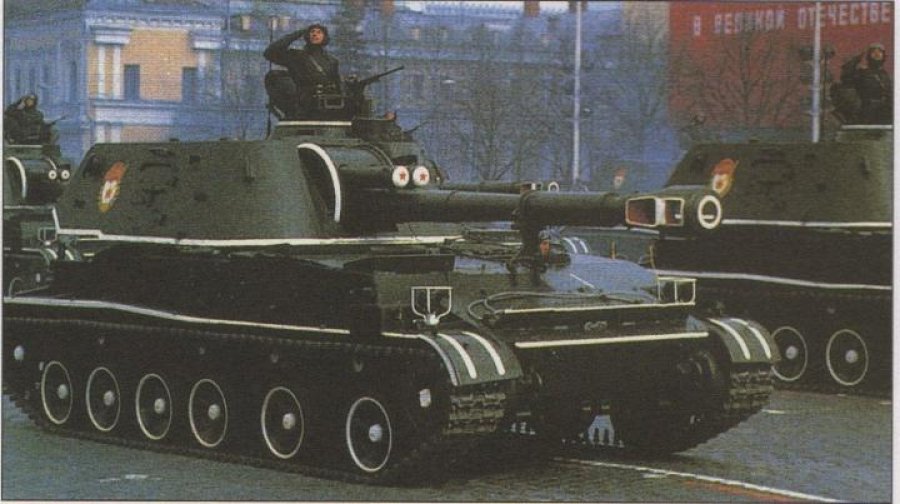 OVERVIEW: The 2S3 Akatsiya (Russian for Acacia) is a fully-tracked and armored self-propelled 152mm howitzer.

DETAILS: The 2S3 152mm self-propelled howitzer was first seen by the West in 1973. It mounted the D-22 (2A33) 152mm howitzer which was a modified version of the towed D-20 gun-howitzer, featuring a shorter barrel (27 caliber although some sources say 28 caliber) and an added bore evacuator. The 2S3 fired the same ammunition as the towed D-20 gun-howitzer. It was intended to increase the mobility of Soviet artillery organizations and to replace the aging 152mm D-1 howitzer, the 152mm ML-20 (M1937) howitzer, and the 152mm D-20 gun-howitzer. Standard ammunition is HE-Fragmentation, smoke, illumination, and chemical. Developed later were Dual-purpose Improved Conventional Munitions (DPICM), scatterable mines (AT & AP), flechette, Precision Guided Munitions (PGM), communications jammer, and extended range Rocket Assisted Projectiles (RAP). Normal range is 17,300m (9.3nm) and RAP is up to 20,500m (11nm). Later improvements and upgrades to the 2S3 and ammunition increased the normal range to 18,500m (10nm) and 24,000m (13nm) with RAP.

NOTES: The 2S3 was assigned to the artillery regiment of the Soviet motorized rifle division and tank division, and had either two or three 18-tube battalions. It also replaced towed weapons in some of the artillery brigades of the Front level artillery division in an effort to increase mobility. The 2S3 has seen several system upgrades and modernization and is still in widespread service in the Russian Army today. It has been widely exported and has seen combat in many conflicts. It was first used in the Soviet War in Afghanistan where it proved to be an effective and reliable artillery system.