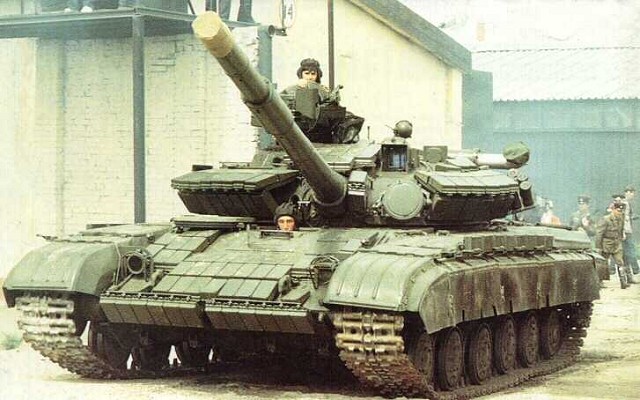 OVERVIEW: The T-64 was a Soviet medium tank/main battle tank.

DETAILS: The T-64 MBT was introduced in the late 1960's. It has a three-man crew, a diesel engine, and mounts a 125mm smoothbore cannon along with a 7.62mm coaxially mounted machine gun and a 12.7mm machine gun on a flex mount on the commander's cupola. The original T-64 mounted the same 115mm gun as the T-62, but with the T-64A the 125mm smoothbore gun was introduced. The T-64 features several design changes from the T-62 such as an automatic loader which reduced crew size from four to three. The T-64 has better mobility with a more powerful engine and it also has better armor, using layers of steel and fiberglass and other non-metallic materials. With the T-64B, bolt-on reactive armor was introduced as was the ability to fire the AT-8 Songster ATGM through the main gun. The T-64 received other upgrades over the years such as passive IR sights and laser rangefinders. Unlike the T-55 and T-62, the T-64 was not exported abroad and was used almost exclusively by the tank regiments of tank divisions, with the T-55 and T-62 being used by the tank regiments and battalions in the motorized rifle divisions.