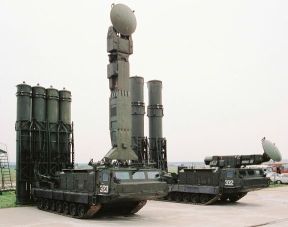 The improved 3K81M/S-300VM/VM1/VM2/VMD/VME/Antey-2500 or SA-23 is most easily differentiated from the 3K81/S-300V by the redesigned 9S32M/ME "Grill Screen" engagement radar, but no less importantly it employs kinematically superior 9M82M/ME missile rounds. The acquisition radars are the improved 9S15M/MV / "Bill Board B" and 9S19M2 Imbir / "High Screen B". Cited range performance for the 9M82M missile was initially 200 km against aerial targets, but more recently this is cited by the manufacturer at 250 km.

The most prominent change in the radar suite is the 9S32M Grill Screen, which employs the much larger space fed antenna design of the 9S32 High Screen, and a higher peak power. The cited range performance for a fighter sized target is in excess of 200 km, and likely better than 250 km given the more recently revised kinematic range for the 9M82M missile.

Importantly, the two stage S-300V/VM missiles are built for much higher acceleration than the S-300P missiles, also reflected in launch footage. The result is that for engagements against aerial targets, the S-300V/VM missiles have a shorter time of flight, and at similar ranges will have considerably higher kinetic energy for endgame manoeuvres compared to their single stage 48N6 series cousins. The cited average speed for the 9M82 missile across the whole trajectory is around 85-90% of the maximum speed cited for the 48N6E2/E3 missiles.