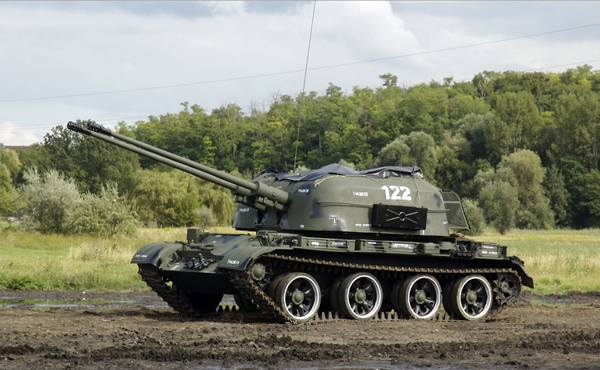 OVERVIEW: The ZSU-57-2 is a self-propelled anti-aircraft gun system developed by the Soviet Union after World War II. It was intended to provide a tracked and lightly armored anti-aircraft vehicle capable of supporting the tank and mechanized infantry formations of the Red Army in the offense.

DETAILS: The ZSU-57-2 was developed shortly after World War II to fulfill the need to have a highly mobile and lightly armored anti-aircraft support vehicle that was capable of keeping up with the advancing tank and mechanized infantry formations of the Red Army. Previous designs based on World War II era vehicles and weapons proved to be inadequate in that task. The ZSU-57-2 consisted of two 57mm S-68 L/69 cannons mounted side by side in a large powered turret on a modified lighter version of the T-54 tank chassis. The cannons were capable of an operational rate of fire of 70 rounds/min per gun. The ZSU-57-2 used only an optical sighting system and it lacked any fire control or tracking radar, making the weapon nearly useless against modern jet aircraft in low visibility conditions. The ZSU-57-2 was also used in a secondary role of providing direct fire support to ground troops.

NOTES: The ZSU-57-2 entered service in 1955 and was the primary SPAAG in service with the Soviet Army until the introduction of the ZSU-23-4 in 1965, after which time it was slowly phased out of service. The ZSU-57-2 was exported to many countries and remains in service with some. China produced a copy of the ZSU-57-2 called the Type 80 self-propelled anti-aircraft tank.