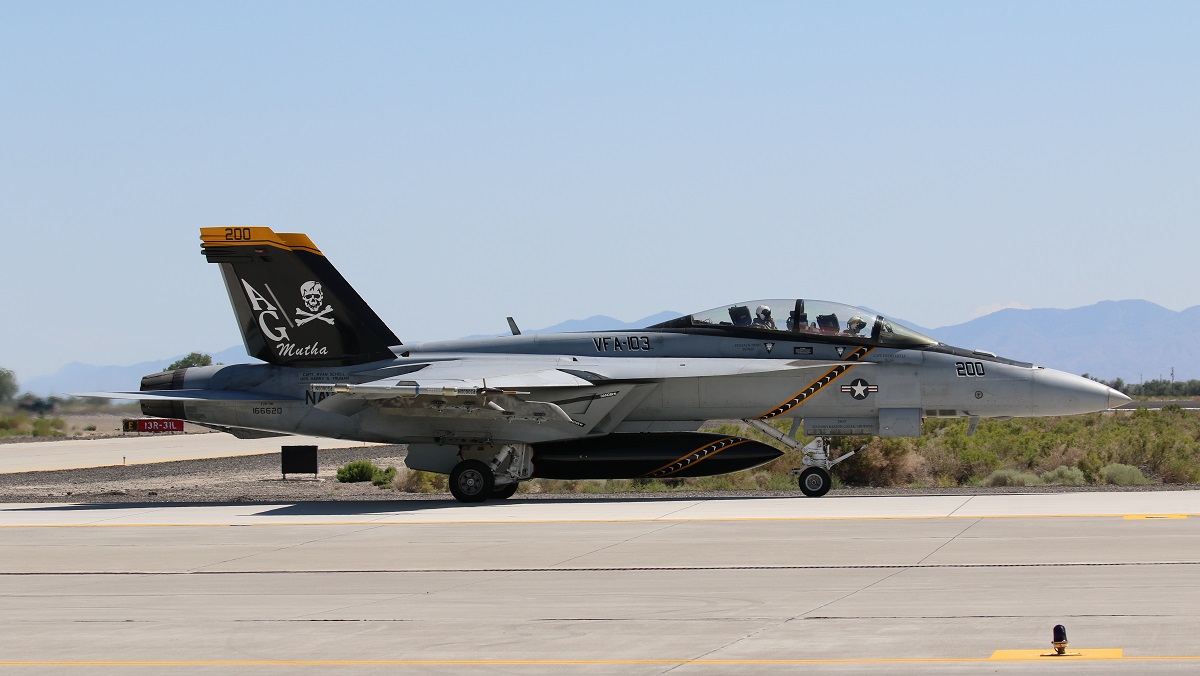 OVERVIEW: The Boeing F/A-18E Super Hornet and related twin-seat F/A-18F are twin-engine carrier-based multirole fighter aircraft variants based on the McDonnell Douglas F/A-18 Hornet. The F/A-18E single-seat and F/A-18F tandem-seat variants are larger and more advanced derivatives of the F/A-18C and D Hornet. The Super Hornet has an internal 20 mm M61 rotary cannon and can carry air-to-air missiles and air-to-surface weapons. Additional fuel can be carried in up to five external fuel tanks and the aircraft can be configured as an airborne tanker by adding an external air refueling system.

Designed and initially produced by McDonnell Douglas, the Super Hornet first flew in 1995. Full-rate production began in September 1997, after the merger of McDonnell Douglas and Boeing the previous month. The Super Hornet entered service with the United States Navy in 1999, replacing the Grumman F-14 Tomcat, which was retired in 2006; the Super Hornet serves alongside the original Hornet. The Royal Australian Air Force (RAAF), which has operated the F/A-18A as its main fighter since 1984, ordered the F/A-18F in 2007 to replace its aging F-111 fleet. RAAF Super Hornets entered service in December 2010.

DETAILS: The concept of an enlarged Hornet was first proposed in 1980s, when an early version was marketed by McDonnell Douglas as Hornet 2000. The Hornet 2000 concept was an advanced version of the F/A-18 with a larger wing and a longer fuselage to carry more fuel and more powerful engines. The Hornet 2000 study was officially announced by McDonnell Douglas in January 1988. At the same time, U.S. Naval Aviation faced a number of problems. The McDonnell Douglas A-12 Avenger II program, intended to replace the obsolete Grumman A-6 Intruder and LTV A-7 Corsair II, had run into serious problems and was canceled. The end of the Cold War subsequently led to a period of military budget cuts and considerable restructuring.

With no clean-sheet program in the works, the Navy considered updating an existing design as a more attractive approach. As an alternative to the A-12, McDonnell Douglas proposed the "Super Hornet" (initially "Hornet II" in the 1980s), an improvement of the successful early F/A-18 models, which could serve as an alternate replacement for the A-6 Intruder. At the same time, the Navy needed a fleet defense fighter to replace the canceled Navy Advanced Tactical Fighter (NATF), which was to have developed a navalized variant of the Air Force's Lockheed Martin F-22 Raptor.

The Super Hornet, unlike the previous Hornet, is designed so it can be equipped with an aerial refueling system (ARS) or "buddy store" for the refueling of other aircraft, filling the tactical airborne tanker role the Navy had lost with the retirement of the KA-6D and Lockheed S-3B Viking tankers. The ARS includes an external 330 US gal (1,200 L) tank with hose reel on the centerline, along with four external 480 US gal (1,800 L) tanks and internal tanks, for a total of 29,000 lb (13,000 kg) of fuel on the aircraft. On typical missions a fifth of the air wing is dedicated to the tanker role, which consumes aircraft fatigue life expectancy faster than other missions.

Survivability is an important feature of the Super Hornet design. The U.S. Navy took a "balanced approach" to survivability in its design. This means that it does not rely on low-observable technology, such as stealth systems, to the exclusion of other survivability factors. Instead, its design incorporates a combination of stealth, advanced electronic-warfare capabilities, reduced ballistic vulnerability, the use of standoff weapons, and innovative tactics that cumulatively and collectively enhance the safety of the fighter and crew.