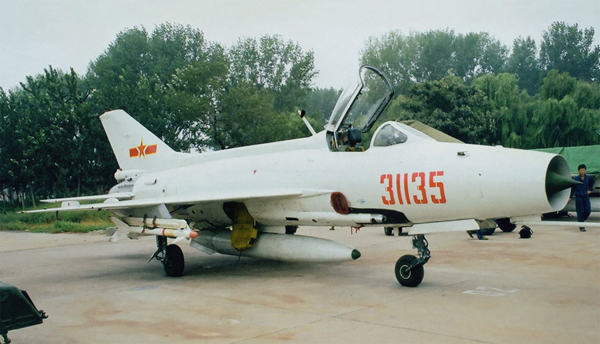 OVERVIEW: The Mikoyan-Gurevich MiG-21 (Fishbed) is a supersonic jet fighter aircraft, designed by the Mikoyan-Gurevich Design Bureau in the Soviet Union. It was popularly nicknamed "Balalaika", from the aircraft's planform-view resemblance to the Russian stringed musical instrument by Polish pilots due to the shape of its fuselage.

DETAILS: The MiG-21 was the first successful Soviet aircraft combining fighter and interceptor characteristics in a single aircraft. It was a lightweight fighter, achieving Mach 2 with a relatively low-powered afterburning turbojet, and is thus comparable to the American Lockheed F-104 Starfighter and Northrop F-5 Freedom Fighter and the French Dassault Mirage III. Its basic layout was used for numerous other Soviet designs; delta-winged aircraft included Su-9 interceptor and the fast E-150 prototype from MiG bureau while the mass-produced successful front fighter Su-7 and Mikoyan's I-75 experimental interceptor combined a similar fuselage shape with swept-back wings. However, the characteristic layout with the shock cone and front air intake did not see widespread use outside the USSR and finally proved to have limited development potential, mainly because of the very small space available for the radar.

Like many aircraft designed as interceptors, the MiG-21 had a short range. This was not helped by a design defect where the center of gravity shifted rearwards once two-thirds of the fuel had been used. This had the effect of making the plane uncontrollable, resulting in an endurance of only 45 minutes in clean condition. The issue of the short endurance and low fuel capacity of the MiG-21F, PF, PFM, S/SM and M/MF variants though each had a somewhat greater fuel capacity than its predecessor led to the development of the MT and SMT variants. These had a range increase of 250 km (155 mi) compared to the MiG-21SM, but at the cost of worsening all other performance figures (such as a lower service ceiling and slower time to altitude).

The delta wing, while excellent for a fast-climbing interceptor, meant any form of turning combat led to a rapid loss of speed. However, the light loading of the aircraft could mean that a climb rate of 235 m/s (46,250 ft/min) was possible with a combat-loaded MiG-21bis,[1] not far short of the performance of the later F-16A. Given a skilled pilot and capable missiles, it could give a good account of itself against contemporary fighters. Its G-limits were increased from +7Gs in initial variants to +8.5Gs in the latest variants. It was replaced by the newer variable-geometry MiG-23 and MiG-27 for ground support duties. However, not until the MiG-29 would the Soviet Union ultimately replace the MiG-21 as a maneuvering dogfighter to counter new American air superiority types.

The MiG-21 was exported widely and continues to be used. The aircraft's simple controls, engine, weapons, and avionics were typical of Soviet-era military designs. The use of a tail with the delta wing aids stability and control at the extremes of the flight envelope, enhancing safety for lower-skilled pilots; this in turn enhanced its marketability in exports to developing countries with limited training programs and restricted pilot pools. While technologically inferior to the more advanced fighters it often faced, low production and maintenance costs made it a favorite of nations buying Eastern Bloc military hardware. Several Russian, Israeli and Romanian firms have begun to offer upgrade packages to MiG-21 operators, designed to bring the aircraft up to a modern standard, with greatly upgraded avionics and armaments.