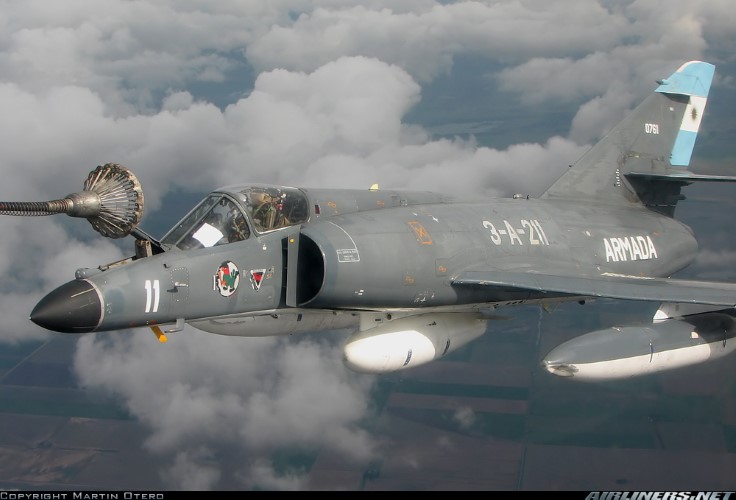 ﻿The Dassault-Breguet Super Étendard (Étendard is French for "battle flag") is a French carrier-borne strike fighter aircraft designed by Dassault-Breguet for service with the French Navy. The aircraft is an advanced development of the Étendard IVM. The Super Étendard first flew in October 1974 and entered French service in June 1978.
The Super Étendard was also operated by Iraq and Argentina, who both deployed the aircraft during wartime. Argentina's use of the Super Étendard and the Exocet missile during the 1982 Falklands War led to the aircraft gaining considerable popular recognition.
supply spare parts for their A-4Q Skyhawks. Between August and November 1981, five Super Étendards and five Exocets were shipped to Argentina. The Super Étendards, armed with Exocet anti-ship missiles, would play a key role in the Falklands War between Argentina and the United Kingdom in 1982. The squadron was stationed at an air base on the Rio Grande; during the conflict, the threat posed to British naval forces led to the planning of Operation Mikado and other proposed infiltration missions to raid the air base, aiming to destroy the Super Étendards to prevent their use.
A first attempt to attack the British fleet was made on 2 May 1982, but this was abandoned due to flight-refuelling problems. On 4 May, two Super Étendards, guided by a Lockheed P-2 Neptune, launched one Exocet each at the British destroyer HMS Sheffield, with a single missile fatally striking Sheffield. On 25 May, another attack by two Super Étendards resulted in two missiles hitting the merchant ship Atlantic Conveyor, which was carrying several helicopters and various other supplies to the front line. The Exocets that struck the Atlantic Conveyor had been inadvertently redirected by decoy chaff deployed as a defensive measure by other ships; both the Sheffield and the Atlantic Conveyor sank as a result of the Exocet strikes.
The fifth missile was launched in an attack intended to strike against the British aircraft carrier HMS Invincible.
Following the end of the conflict, by 1984 Argentina had been able to complete the delivery of the full 14 Super Étendards ordered as well as a number of Exocets with which to arm them. Super Étendards performed qualifications on aircraft carrier ARA 25 de Mayo until the ship's final retirement. Since 1993, Argentinian pilots have practised on board the neighbouring Brazilian Navy's aircraft carrier São Paulo. Touch-and-go landing exercises were also common on US Navy carriers during Gringo-Gaucho manoeuvres and joint exercises.
In 2009, an agreement was signed between Argentina and France to upgrade Argentina's remaining fleet of Super Étendards. An earlier proposal to acquire former French Naval Super Étendards was rejected due to high levels of accumulated flight hours, instead equipment and hardware was removed from retiring French airframes and installed into Argentinian aircraft, effectively upgrading them to the Super Etendard Modernise (SEM) standard. As of 2012, 11 Super Étendards remain in service with Argentina.