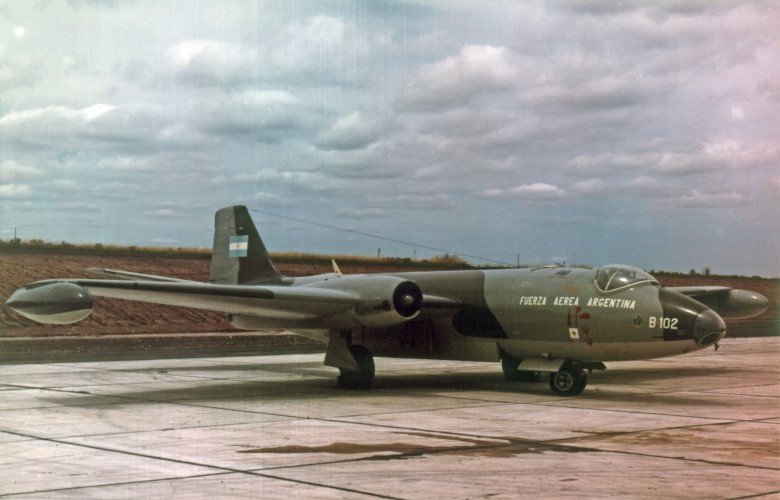 The English Electric Canberra is a British first-generation jet-powered light bomber manufactured in large numbers through the 1950s. The Canberra could fly at a higher altitude than any other bomber through the 1950s and set a world altitude record of 70,310 ft (21,430 m) in 1957. Due to its ability to evade the early jet interceptors, and its significant performance advancement over contemporary piston-engined bombers, the Canberra was a popular export product and served with many nations.
In addition to being a tactical nuclear strike aircraft, the Canberra proved to be highly adaptable, serving in varied roles such as tactical bombing and photographic and electronic reconnaissance. Canberras served in the Suez Crisis, the Vietnam War, the Falklands War, the Indo-Pakistani Wars, and numerous African conflicts. In several wars, both of the opposing forces had Canberras in their air forces.
The Argentine Air Force received 10 B62s and two T64 trainers at the beginning of the 1970s. During the Falklands War in 1982, eight of them were deployed to Trelew, 670 miles (1,080 km) from the islands, to avoid congestion on the closer southern airfields. They were within operating range of the British task force, but the Canberra was judged to be a limited threat due to its poor manoeuvrability compared with the Sea Harriers on air defence duties. On 1 May 1982, during an attack on the British ships sailing towards the islands by several Israeli-built Daggers and 3 Canberras, one of the bombers and at least one Dagger was shot down by responding Sea Harriers, firing AIM-9L Sidewinder missiles, for no losses on the British side. Following this engagement, Argentina stopped using the Canberra on such missions.
Nonetheless, from 1 May to 14 June 1982, Argentine Canberras made 54 sorties; 36 of them bombing missions, of which 22 were at night against ground troops. Two aircraft were lost in combat, the first to a Sea Harrier by an AIM-9L Sidewinder air-to-air missile on 1 May 1982. On 13 June 1982, a single Canberra Mk.62 of Grupo de Bombardeo 2, B-108 was shot down while flying at 12,000 m (39,000 ft). It had been en route to bomb British troops at Port Harriet House when it was struck by a Sea Dart missile fired from HMS Cardiff. The pilot ejected safely but the navigator was killed. It was the last Argentine aircraft to be lost in combat during the Falklands War, the Argentine forces surrendering the next day. Argentina retired its last Canberras in April 2000.
http://en.wikipedia.org/wiki/English_Electric_Canberra