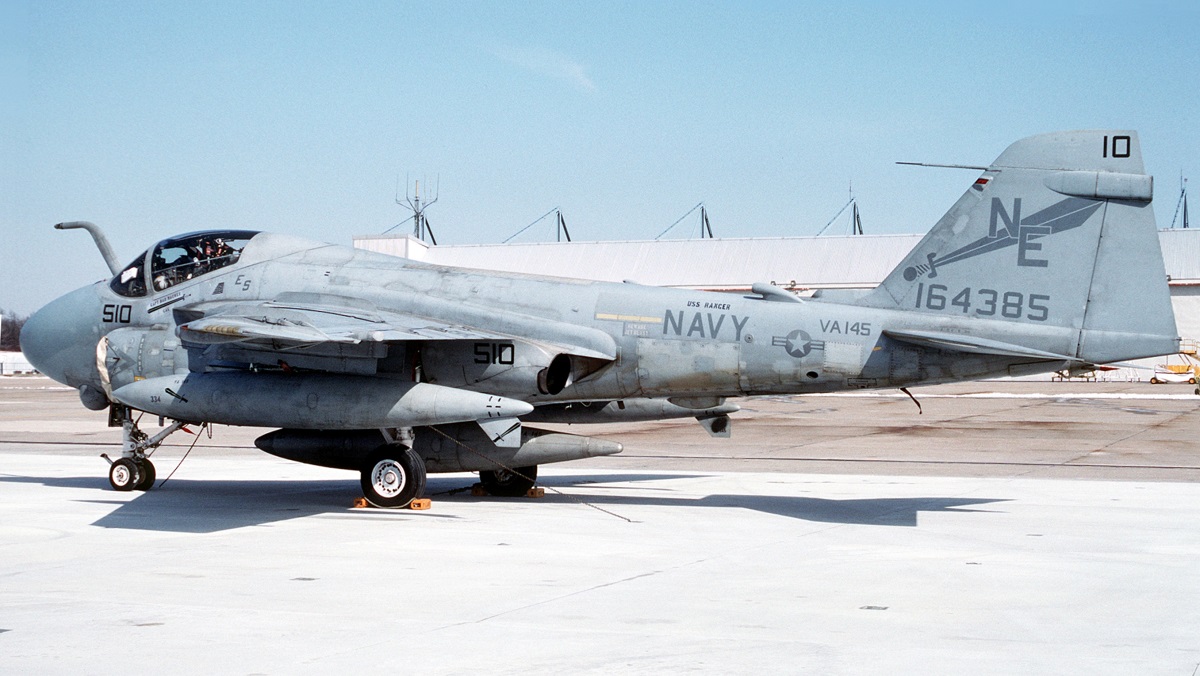 OVERVIEW: The Grumman A-6 Intruder was an American, twin jet-engine, mid-wing all-weather attack aircraft built by Grumman Aerospace. In service with the U.S. Navy and U.S. Marine Corps between 1963 and 1997, the Intruder was designed as an all-weather medium attack aircraft to replace the piston-engined Douglas A-1 Skyraider. As the A-6E was slated for retirement, its precision strike mission was taken over by the Grumman F-14 Tomcat equipped with a LANTIRN pod. From the A-6, a specialized electronic warfare derivative, the EA-6 was developed.

DETAILS: The A-6's design team was led by Lawrence Mead, Jr. He later played a lead role in the design of the Grumman F-14 Tomcat and the Lunar Excursion Module.

The jet nozzles were originally designed to swivel downwards for shorter takeoffs and landings. This feature was initially included on prototype aircraft, but was removed from the design during flight testing. The cockpit used an unusual double pane windscreen and side-by-side seating arrangement in which the pilot sat in the left seat, while the bombardier/navigator sat to the right and slightly below. The incorporation of an additional crew member with separate responsibilities, along with a unique cathode ray tube (CRT) display that provided a synthetic display of terrain ahead, enabled low-level attack in all weather conditions.

The A-6's wing was very efficient at subsonic speeds compared to supersonic fighters such as the McDonnell Douglas F-4 Phantom II, which are also limited to subsonic speeds when carrying a payload of bombs. The wing was also designed to provide good maneuverability with a sizable bomb load. A very similar wing would be put on pivots on Grumman's later supersonic swing-wing Grumman F-14 Tomcat, as well as similar landing gear. The Intruder was also equipped with the "Deceleron", a type of airbrake on the wings with two panels that opened in opposite directions.

For its day, the Intruder had surprisingly sophisticated avionics (electronics systems), with a high degree of integration.

The Intruder was equipped to carry and launch a nuclear bomb and Navy crews regularly planned for assigned nuclear missions. Because the A-6 was a low-flying attack aircraft, an unusual method was developed for launching an atomic bomb, should that ever be required. Known as LABS-IP (Low Altitude Bombing System - Inverted Position) it called for a high-speed low-level approach. Nearing the target point, the pilot would put the aircraft into a steep climb. At a computer-calculated point in the climb, the weapon would be released, with momentum carrying it upwards and forwards. The pilot would continue the climb even more steeply, until near a vertical position the aircraft would be rolled and turned, heading back in the direction from which it came. It would then depart from the area at maximum acceleration. During this time, the bomb would rise to an apex, still heading in its original direction, then begin to fall towards the target while traveling further forward. At a pre-programmed height, it would detonate. By that time, the Intruder would be several miles away, traveling at top speed, and thus able to stay ahead of the shock wave from the explosion. This unusual maneuver was known as an "over the shoulder" bomb launch.