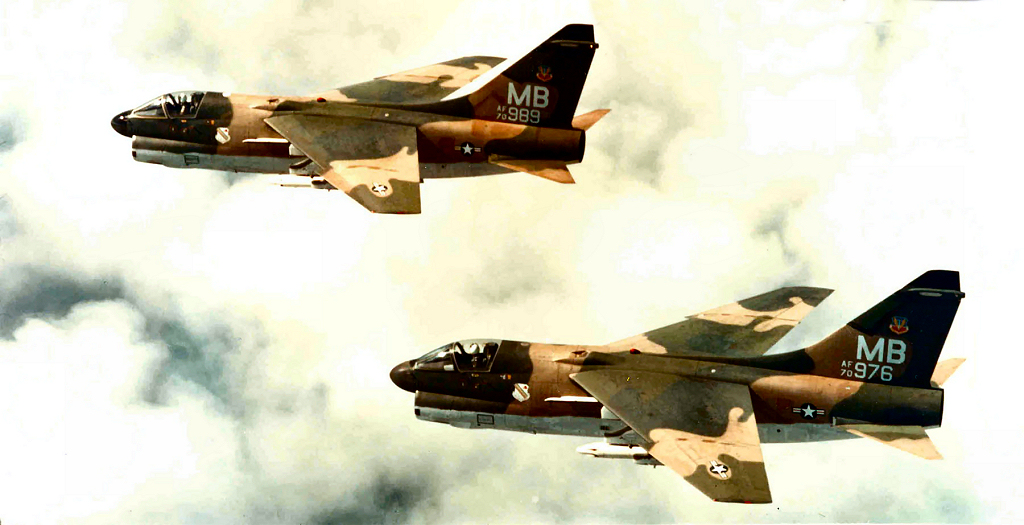 OVERVIEW: The Ling-Temco-Vought A-7 Corsair II is a carrier-capable subsonic light attack aircraft introduced to replace the Douglas A-4 Skyhawk. The A-7 airframe design was based on the successful supersonic Vought F-8 Crusader. It was one of the first combat aircraft to feature a head-up display (HUD), an inertial navigation system (INS), and a turbofan engine.

The Corsair II initially entered service with the United States Navy during the Vietnam War. It was later adopted by the United States Air Force, including the Air National Guard, to replace the Douglas A-1 Skyraider, North American F-100 Super Sabre and Republic F-105 Thunderchief. The aircraft was also exported to Greece in the 1970s, and Portugal in the late 1980s.

DETAILS: Initial operational basing/homeporting for U.S. Navy A-7 squadrons was at NAS Cecil Field, Florida for Atlantic Fleet units and NAS Lemoore, California for Pacific Fleet units. This was in keeping with the role of these bases in already hosting the A-4 Skyhawk attack squadrons that would eventually transition to the A-7.

From 1967 to 1971, a total of 27 Navy squadrons took delivery of four different A-7A/B/C/E models. The Vought plant in Dallas, TX employed up to 35,000 workers who turned out one aircraft a day for several years to support the Navy carrier-based needs for Vietnam and SE Asia and commitments to NATO in Europe. In 1974, when the USS Midway (CV-41) became the first Forward Deployed Naval Force (FDNF) aircraft carrier to be homeported in Yokosuka, Japan, two A-7B squadrons assigned to Carrier Air Wing FIVE (CVW-5) were concurrently homeported at NAF Atsugi, Japan. In 1978, these squadrons (VA-93 and VA-56) finally transitioned to the much more advanced A-7E model. Six Naval Reserve attack squadrons would also eventually transition to the A-7, operating from NAS Cecil Field, Florida; NAS Atlanta/Dobbins ARB, Georgia; NAS New Orleans, Louisiana; NAS Alameda, California and NAS Point Mugu, California. An additional active duty squadron stood up in the 1980s, Tactical Electronic Warfare Squadron 34 (VAQ-34) at NAS Point Mugu, which would operate twin-seat TA-7C and EA-7L aircraft with both a pilot and a naval flight officer in an adversary electronic warfare role.

Pilots of the early A-7s lauded the aircraft for general ease of flying (with the exceptions of poor stability on crosswind landings and miserable stopping performance on wet runways with an inoperative anti-skid braking system) and excellent forward visibility but noted a lack of engine thrust. This was addressed with A-7B and more thoroughly with A-7D/E. The turbofan engine provided a dramatic increase in fuel efficiency compared with earlier turbojets - the A-7D was said to have specific fuel consumption one sixth that of an F-100 Super Sabre at equivalent thrust. An A-7D carrying 12 x 500 lb (227 kg) bombs at 480 mph (775 km/h) at 33,000 ft (10,000 m) used only 3,350 lb (1,500 kg) of fuel per hour. Typical fuel consumption at mission retrograde during aircraft carrier recovery was approximately 30 pounds per minute compared to 100+ pounds per minute for the Phantom F-4J/N series. The A-7 Corsair II was tagged with the nickname "SLUF" ("Short Little Ugly Fucker") by pilots.