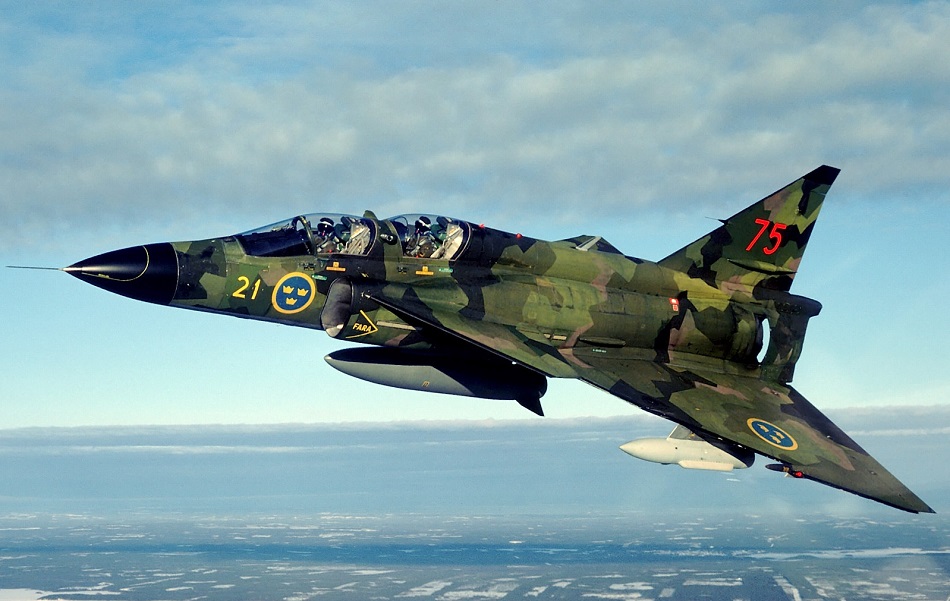 This remarkable aircraft was developed by Saab in the 1960's to replace the Saab 32 Lansen. The prototype first flew in 1967 and the aircraft started entering service in 1971. The design criteria for the new aircraft included Mach 2 speed at altitude, supersonic flight at low level and outstanding STOL performance. To meet the requirements Saab adopted the then unconventional canard delta configuration. Unlike more recent canard designs the foreplanes on the Viggen are fixed but they do have trailing edge flaps. The Viggen is powered by the P&W JT8D turbofan manufactured under license by Volvo as the RM8.

The aircraft was produced in a number of variants, specifically tailored to Swedish requirements. AJ 37 aircraft are optimized for ground attack with a secondary interceptor role. They feature an Ericsson PS-37/A radar, a digital nav/attack system and a HUD. Conversely the JA 37 models are optimized for interception duties but retain a secondary ground attack role. These carry the Ericsson PS-47/A multimode, Doppler, LD/SD radar, Skyflash and Sidewinder AAMs, new avionics and more powerful RM8B engine. The SF and SH 37 models are reconnaissance models with the SH optimized for maritime recon and with a secondary maritime strike role. The SK 37 is a two seat conversion training variant. Around 100 AJ, SH and SF 37s have been converted to a new multirole AJS standard. This gives the aircraft and expanded weapons range and some new avionics. Sixty JA 37s have undergone a Mid Life Upgrade which sees a modified PS-46/A radar, improved avionics and cockpit displays and AIM-120 compatibility added
Original Author: Daniel Hayes