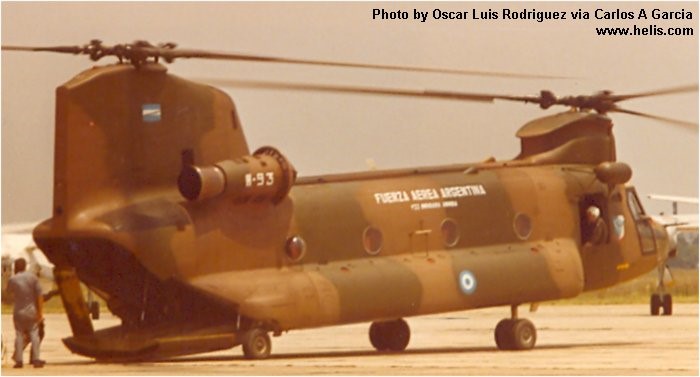 The Boeing CH-47 Chinook is an American twin-engine, tandem rotor heavy-lift helicopter. Its primary roles are troop movement, artillery placement and battlefield resupply. It has a wide loading ramp at the rear of the fuselage and three external-cargo hooks. With a top speed of 170 knots (196 mph, 315 km/h) the helicopter is faster than contemporary utility and attack helicopters of the 1960s. The CH-47 is among the heaviest lifting Western helicopters. Its name is from the Native American Chinook people.
The Chinook was used both by Argentina and the United Kingdom during the Falklands War in 1982. The Argentine Air Force and the Argentine Army each deployed two CH-47C helicopters, which were widely used in general transport duties. Of the Army's aircraft, one was destroyed on the ground by a Harrier while the other was captured by the British and reused after the war. Both Argentine Air Force helicopters returned to Argentina and remained in service until 2002.
http://en.wikipedia.org/wiki/Boeing_CH-47_Chinook