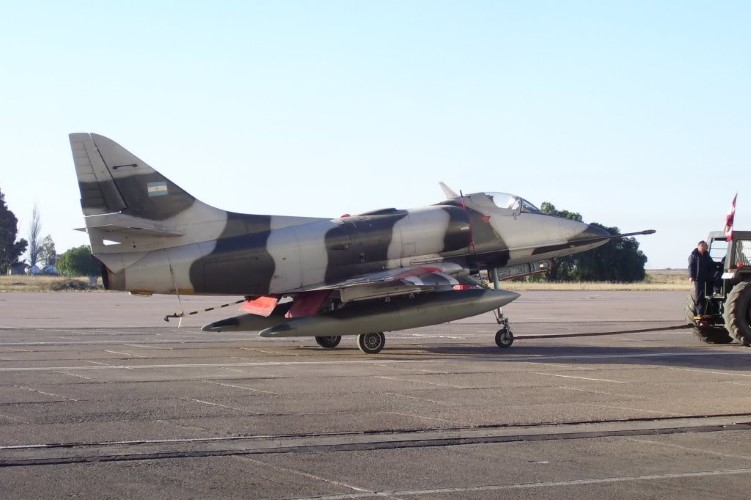 The Douglas A-4 Skyhawk is a carrier-capable attack aircraft developed for the United States Navy and United States Marine Corps. The delta winged, single-engined Skyhawk was designed and produced by Douglas Aircraft Company, and later by McDonnell Douglas. It was originally designated the A4D under the U.S. Navy's pre-1962 designation system.
Argentina was the first foreign user of the Skyhawk and it had nearly 130 A-4s delivered since 1965. The Argentine Air Force received 25 A-4Bs in 1966 and another 25 in 1970, all refurbished in the United States by Lockheed Service Co. prior to their delivery as A-4P, although they were still locally known as A-4B. They had three weapon pylons and served in the 5th Air Brigade (Spanish: V Brigada Aérea). In 1976, 25 A-4Cs were ordered to replace the F-86 Sabres still in service in the 4th Air Brigade (Spanish: IV Brigada Aérea). They were received as is and refurbished to flight status by the Air Force technicians at Río Cuarto, Córdoba. The C model had five weapon pylons and could use AIM-9B Sidewinders air-to-air missiles.
http://en.wikipedia.org/wiki/A-4M_Skyhawk