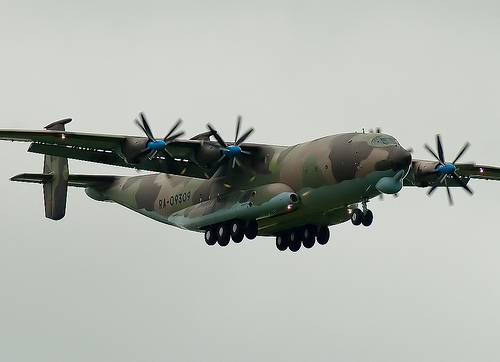 The largest turboprop plane of all time, the massive An-22 freighter entered service in 1965. Despite it’s size, it was designed for operations on short/rough airstrips, with adjustable-pressure landing gear and double-slotted flaps. The huge fuselage was divided into a small pressurized cabin for up to 28 passengers, and an unpressurized 108’ cargo bay fed by rear cargo doors which can be opened inflight for paratrooper operations. The cabin was large enough to accommodate heavy artillery, MBT’s, mobile SAMs such as the SA-6 “Grumble”, mobile radars like the “Big Fred”, and small nuclear missiles such as the SS-1A “Scud” or SS-23 “Spider”. About six dozen were built, currently, about half that many remain in service with an independent aviation squadron (IAS) of the Russian Federation AF at Tver. The An-22 was never exported.
A double-decker civilian airliner variant seating 724 passengers was proposed to Aeroflot but rejected.
During the 1973 Arab-Israeli conflict, An-22’s of the 556th Aviation Regiment flew 15,000 tons of supplies between the Ukranian SSR and Syria. When tanks or vehicles were delivered, it was common for Soviet crews to drive them from the airport to the frontline to free up Syrian crews.
The An-22 was used heavily in Afghanistan, from the initial 1979 invasion until the Soviet withdrawal. One went down north of Kabul, it is unknown if it crashed or was shot down.