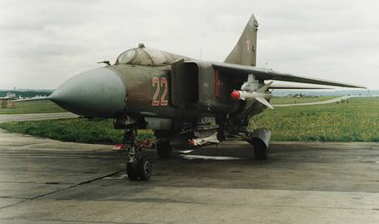 OVERVIEW: The Mikoyan-Gurevich MiG-23 (Flogger) is a variable-geometry fighter aircraft, designed by the Mikoyan-Gurevich design bureau in the Soviet Union. It is considered to belong to the Soviet third generation jet fighter category, along with similarly aged Soviet fighters such as the MiG-25 "Foxbat". It was the first attempt by the Soviet Union to design look-down/shoot-down radar and one of the first to be armed with beyond visual range missiles, and the first MiG production fighter aircraft to have intakes at the sides of the fuselage. Production started in 1970 and reached large numbers with over 5,000 aircraft built. Today the MiG-23 remains in limited service with various export customers.

DETAILS: The MiG-23's predecessor, the MiG-21 (NATO reporting name "Fishbed"), was fast and agile, but limited in its operational capabilities by its primitive radar, short range, and limited weapons load (restricted in some aircraft to a pair of short-range R-3/K-13 (AA-2 "Atoll" air-to-air missiles). The MiG-23 was to be a heavier, more powerful machine designed to remedy these deficiencies, and match Western aircraft like the F-4 Phantom. The new fighter was to feature a totally new S-23 sensor and weapon system capable of firing beyond-visual-range (BVR) missiles.

The General Dynamics F-111 and McDonnell Douglas F-4 Phantom II were the main Western influences on the MiG-23. The Soviets, however, wanted a much lighter, single-engined fighter to maximize agility. Both the F-111 and the MiG-23 were designed as fighters, but the heavy weight and inherent stability of the F-111 turned it into a long-range interdictor and kept it out of the fighter role. The MiG-23's designers kept the MiG-23 light and agile enough to dogfight with enemy fighters.

The MiG-23's armament evolved as the type's avionics were upgraded and new variants were deployed. The earliest versions, which were equipped with the MiG-21's fire control system, were limited to firing variants of the R-3/K-13 (AA-2 "Atoll") missile. The R-60 (AA-8 "Aphid") replaced the R-3 during the '70s, and from the MiG-23M onwards the BVR R-23/R-24 (AA-7 "Apex") was carried. The MiG-23MLD is capable of firing the R-73 (AA-11 "Archer"), but this missile was not exported until the MiG-29 was released for export. The helmet-mounted sight associated with the R-73 missile was fitted on the MiG-23MLDG and other experimental MiG-23MLD subvariants that never entered production as had been originally planned. The reason was that these MiG-23MLD subvariants had less priority than the then ongoing MiG-29 program, and the Mikoyan bureau therefore decided to concentrate all their efforts on the MiG-29 program and halted further work on the MiG-23. Nevertheless, a helmet-mounted sight is now offered as part of the MiG-23-98 upgrade. There were reports of the MiG-23MLD being capable of firing the R-27 (AA-10 "Alamo") beyond experimental tests; however, it seems only Angola's MiG-23-98s are capable of doing so. A MiG-23 was used to test and fire the R-27, R-73, and R-77 (AA-12 "Adder") air-to-air missiles during their early flight and firing trials. Ground-attack armament includes 57 mm rocket pods, general purpose bombs up to 500 kg in size, gun pods, and Kh-23 (AS-7 "Kerry") radio-guided missiles. Up to four external fuel tanks could be carried.