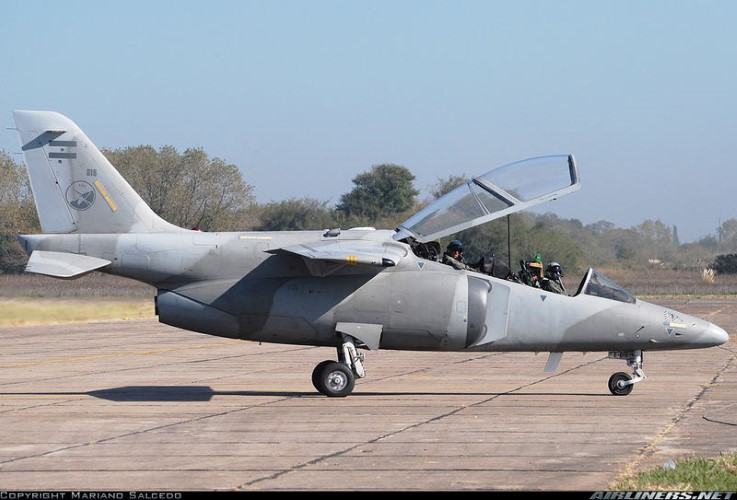 The FMA IA 63 Pampa is an advanced trainer aircraft with combat capability, produced in Argentina by Fabrica Militar de Aviones (FMA) with assistance from Dornier of Germany.
Preliminary design studies for a replacement for the Morane-Saulnier MS-760 of the Argentine Air Force started at the Fábrica Militar de Aviones (FMA) in 1978, with these studies resulting in selection of a proposal powered by a single Garrett TFE731 turbofan with high, unswept wings. At the same time the FMA signed a partnership agreement with Dornier to develop the new aircraft.
Although influenced by the Dassault/Dornier Alpha Jet design, the Pampa differs in being a smaller aircraft, it is also single-engined and has straight supercritical wings rather than the swept ones of the Alpha Jet. It is constructed mainly of aluminium alloy, with carbon-fibre used for components such as the air intakes. The crew of two sit in tandem under a single piece clamshell canopy. The avionics systems are also simpler than the Franco-German aircraft, which has an important secondary combat role. The Pampa prototype first flew on 6 October 1984.
http://en.wikipedia.org/wiki/IA_63_Pampa