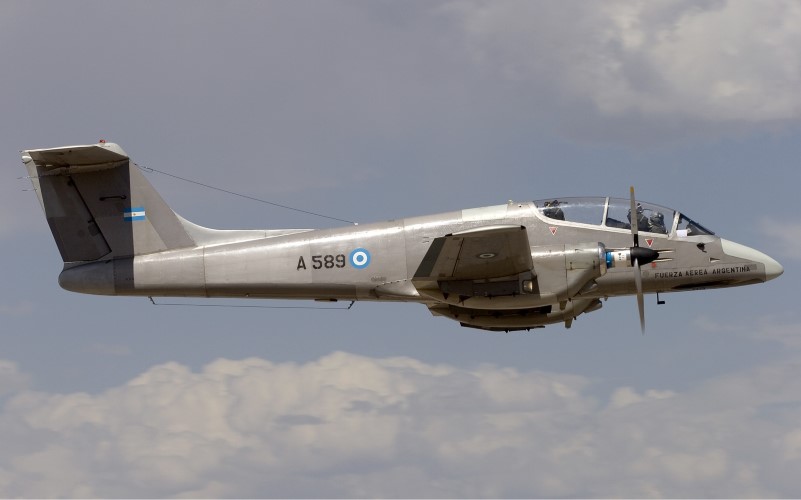 The FMA IA 58 Pucará (Quechua: Fortress) is an Argentine ground-attack and counter-insurgency (COIN) aircraft manufactured by the Fábrica Militar de Aviones. It is a low-wing two-turboprop-engined all-metal monoplane with retractable landing gear, and is capable of operating from unprepared strips when operationally required. The type saw action during the Falklands War and the Sri Lankan Civil War.
The Pucará was designed for operations from short, rough airstrips. The retractable tricycle landing gear, with a single nosewheel and twin mainwheels retracting into the engine nacelles, is therefore fitted with low pressure tyres to suit operations on rough ground, while the undercarriage legs are tall to give good clearance for underslung weapon loads. Three JATO rockets can be fitted under the fuselage to allow extra-short take-off. Fuel is fed from two fuselage tanks of combined capacity of 800 L (180 imp gal; 210 US gal) and two self-sealing tanks of 460 L (100 imp gal; 120 US gal) in the wings. The undercarriage, flaps and brakes are operated hydraulically, with no pneumatic systems.
Fixed armament of the Pucará consists of two Hispano 804 20 mm cannons mounted under the cockpits with 270 rounds each and four 7.62 mm Browning machine guns mounted on the sides of the fuselage with 900 rounds each. Three hardpoints are fitted for the carriage of external stores such as bombs, rockets or external fuel tanks, with one of 1,000 kg (2,200 lb) capacity mounted under the fuselage and the remaining two, of 500 kg (1,100 lb) capacity beneath the wings. Total external weapons load is limited to 1,620 kg (3,570 lb). Onboard armaments are aimed by a simple reflector sight.
http://en.wikipedia.org/wiki/FMA_IA_58_Pucar%C3%A1