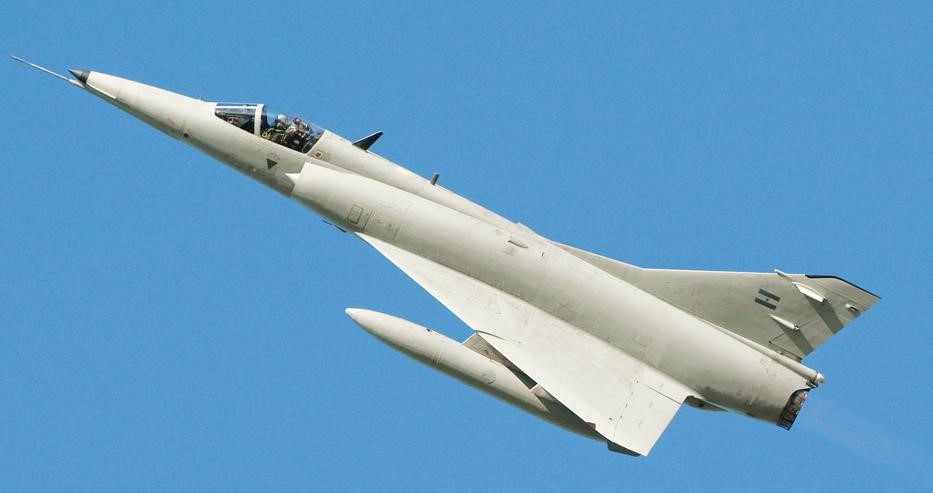 The Dassault Mirage 5 is a supersonic attack aircraft designed in France by Dassault Aviation during the 1960s, and manufactured in France and a number of other countries. It was derived from Dassault's popular Mirage III fighter, and spawned several variants of its own.
The Mirage 5 grew out of a request to Dassault from the Israeli Air Force. Since the weather over the Middle East is clear and sunny most of the time, the Israelis suggested removing avionics, normally located behind the cockpit, from the standard Mirage IIIE to reduce cost and maintenance, and replacing them with more fuel storage for attack missions. In September 1966, the Israelis placed an order for 50 units of the new aircraft.
In 1978 and 1980, Israel sold a total of 35 of their Neshers plus 4 Nesher trainer aircraft (Nesher Ts) to Argentina where they were locally known first as Daggers and after their last upgrade as Fingers. The Argentines lost two IIIEA and 11 Daggers during the Falklands War in 1982, and, as a measure of solidarity, the Peruvians transferred 10 their Mirage 5s to Argentina, under the name Mirage Mara to help make good their losses.

NOTES: Dassault originally developed the Mirage 5 as a low cost, day ground attack fighter at the request of Israel. France embargoed delivery of Israel's 50 Mirage 5J. These aircraft were then delivered to the Armee de l'Air as Mirage 5Fs. The Mirage 5 found a large export market, following on from the success of the Mirage III. Later versions of the aircraft were offered with increasingly more sophisticated electronics. A number were fitted with lightweight radars. The last production version was the Mirage 50 which featured the more powerful Atar9K-50 turbojet of the later Mirage F-1. A number of countries have upgraded their Mirages with new avionics and canards.