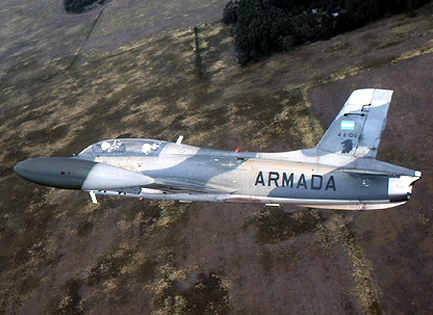 The Aermacchi MB-339 is an Italian military trainer and light attack aircraft. It was developed as a replacement for the earlier MB-326.
The Argentine Naval Aviation (Comando de Aviación Naval) was the first foreign user of the forerunner MB-326GB, buying eight in 1969.
In 1980, Comando de la Aviación Naval Argentina (CANA), or Argentine naval air command, ordered ten MB-339As, advanced trainer and light attack aircraft. The MB339 were delivered in 1981 and were operated by the III Escuadra Naval 's 1 Escuadrilla de Ataque. During the Falklands War, late in April 1982, six of them were located at Port Stanley Airport, renamed Base Aérea Militar (BAM) Malvinas. They were the only attack jets to operate from the Falklands, along with four Beech T-34 Mentor piston-engined armament trainer and light attack aircraft, and 24 turboprop FMA IA 58 Pucará light attack aircraft of Grupo 3 de Ataque. Other Aermacchis operated from three mainland bases, at Almirante Zar, Bahía Blanca and Río Grande, Tierra del Fuego naval air station.
On 3 May 1982 Lt Benitez crashed into high ground with approaching the airport at Port Stanley, and was killed. On 21 May during a routine reconnaissance flight and flown by Lieutenant Owen Crippa, a MB-339A was the first one to attack the Royal Navy amphibious force. The Aermacchi hit the frigate HMS Argonaut, causing light damage. On 27 May, a MB-339A (4-A-114) was shot down by a Blowpipe missile during the Battle for Goose Green, while attempting to attack British ships and landed troops. The Pilot, Teniente (Lt) Miguel, was killed. Three MB-339 airframes were captured by the British.
http://en.wikipedia.org/wiki/Mb339