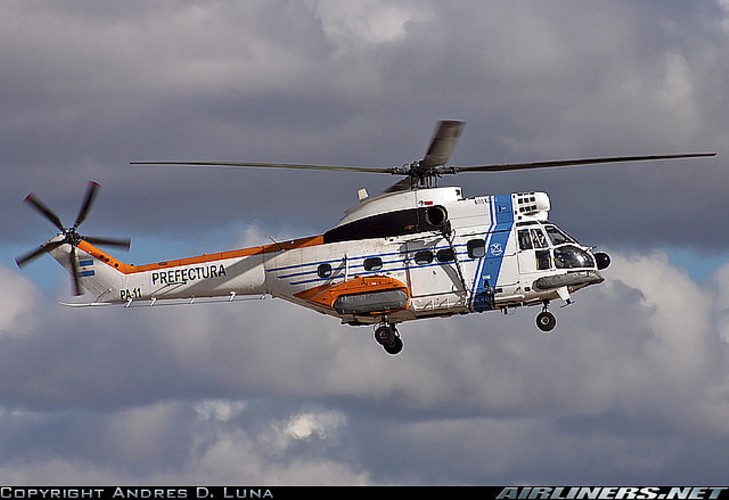 The Aérospatiale SA 330 Puma is a four-bladed, twin-engined medium transport/utility helicopter. The Puma was originally manufactured by Sud Aviation of France, and continued to be produced by Aérospatiale. The Puma was also license-built in Romania as the IAR 330; unlicensed manufacture of an advanced derivative, the Atlas Oryx, was also conducted by South Africa. The Puma was a commercial success and was quickly developed into more advanced models such as the AS332 Super Puma and AS532 Cougar, manufactured by Eurocopter since the early 1990s; in this manner descendants of the Puma remain in production into the 21st century.
The Puma has seen combat in a range of theatres by a number of different operators; significant operations include the Gulf War, the South African Border War, the Portuguese Colonial War, the Yugoslav Wars, the Iraq War, and the Falklands War. The type also saw popular use in the civilian field and has been operated by a number of civil operators.
During the Falklands War in 1982, five SA 330 Pumas of the Argentine Army and one of the Argentine Coast Guard were deployed to the theatre; these could either operate from the decks of Navy vessels as well as performing missions across the breadth of the islands; all were lost in the ensuing conflict. On 3 April, while landing Argentine troops as part of the capture of South Georgia, a Puma was badly damaged by small arms fire from British ground forces and crashed into terrain shortly after. On 9 May, a single Puma was destroyed by a Sea Dart anti-aircraft missile launched from HMS Coventry. On 23 May, a pair of Royal Navy Sea Harriers intercepted three Argentine Pumas in the middle of a supply mission to Port Howard; during the subsequent engagement one Puma was destroyed by colliding with the terrain and a second was disabled and subsequently destroyed by cannon fire from the Sea Harriers, the third Puma escaped. On 30 May, a Puma was lost in the vicinity of Mount Kent under unknown circumstances, possibly due to friendly fire.
http://en.wikipedia.org/wiki/A%C3%A9rospatiale_SA_330_Puma