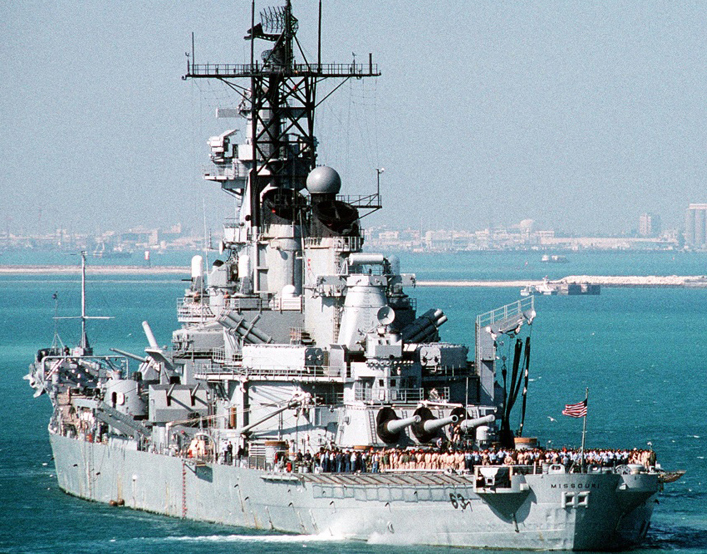 OVERVIEW: The Iowa-class battleships were a class of fast battleships ordered by the United States Navy in 1939 and 1940 to escort the Fast Carrier Task Forces that would operate in the Pacific Theater of World War II. Four were completed; two more were laid down but canceled at war's end and scrapped. Like other third-generation American battleships, the Iowa class followed the design pattern set forth in the preceding North Carolina-class and South Dakota-class battleships, which emphasized speed and the secondary and anti-aircraft batteries.

Between the mid-1940s and the early 1990s, the Iowa-class battleships fought in four major U.S. wars. In World War II, they defended aircraft carriers and shelled Japanese positions. During the Korean War, the battleships provided seaborne artillery support for United Nations forces fighting North Korea, and in 1968, New Jersey shelled Viet Cong and Vietnam People's Army forces in the Vietnam War. All four were reactivated and armed with missiles during the 1980s as part of the 600-ship Navy initiative; during 1991's Operation Desert Storm, Missouri and Wisconsin fired missiles and 16-inch (406 mm) guns at Iraqi targets.

The Iowas carried ten twin enclosed base ring mounts supporting 5 in/38 caliber Mark 28 Mod 0 guns. Originally designed to be mounted upon destroyers built in the 1930s, these guns were so successful that they were added to a myriad of American ships during the Second World War, including every major ship type and many smaller warships constructed between 1934 and 1945. They were considered to be "highly reliable, robust and accurate" by the Navy's Bureau of Ordnance.