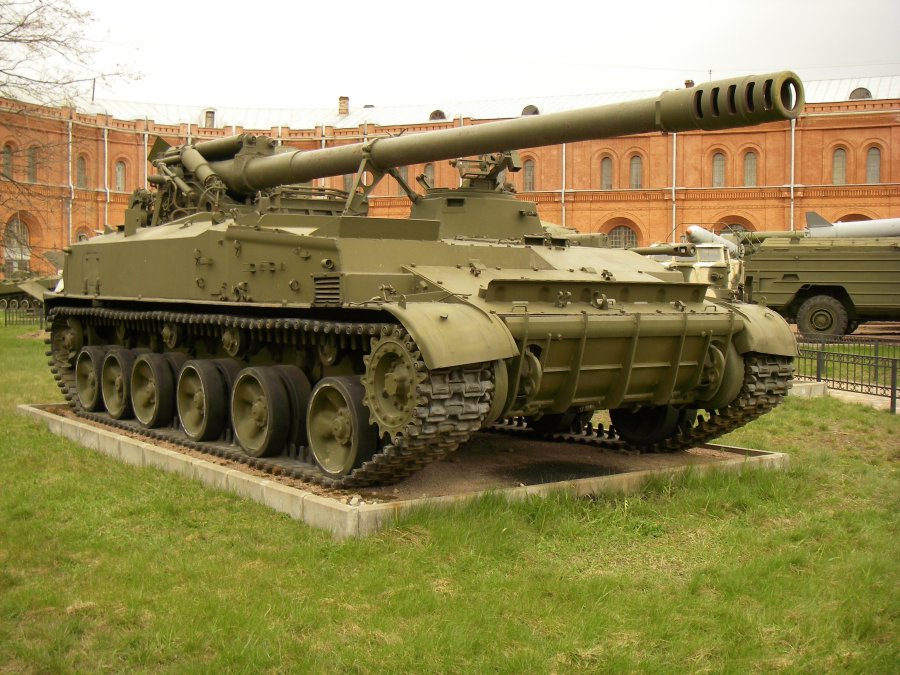 DETAILS: The 2S5 152mm self-propelled gun was first seen by the West in 1981. It was developed along with the towed gun 2A36 to provide self-propelled long range fire support. The 2S5 was particularly suited for counterbattery fire due to its long range. The 2S5 is fitted with a 2A37 152mm/54 barrel (8.2m long, nearly 27 feet) which is essentially the same gun as the 2A36 but adapted to a self-propelled chassis. It uses the same ammunition as the 2A36, whick is not the same ammunition as the D-20 or 2S3 even though they are all 152mm weapons. The 2S5 does not have a 360 degree turret like the 2S3 so it is limited in traverse without moving the entire vehicle. Like the 2A36, the 2S5 is also equipped with a hydro-pneumatic loading assist mechanism to ram the projectile into the breech and is capable of firing six rounds per minute. Standard ammunition is a 46kg HE-Fragmentation round with a range of 27,000m (14.5nm), smoke, illumination, anti-tank, and chemical. Also available is a low-yield nuclear round (up to 2kt) and "cargo shells" which can deploy DPICM submunitions, scatterable mines, leaflets, and active & passive communications jammers. An extended range Rocket Assisted Projectile (RAP) HE-Frag round is also used, giving the gun a range of 40,000m (21.5nm).

NOTES: The self-propelled 2S5 replaced the M-46 130mm towed gun in the gun battalions of the Army artillery brigade and Front level artillery division and provided a significant increase in performance over the M-46. Unlike most Soviet weapons, the 2S5 was rarely exported although it does serve in some of the republics of the former USSR. Most 2S5 that were produced are still in service today.