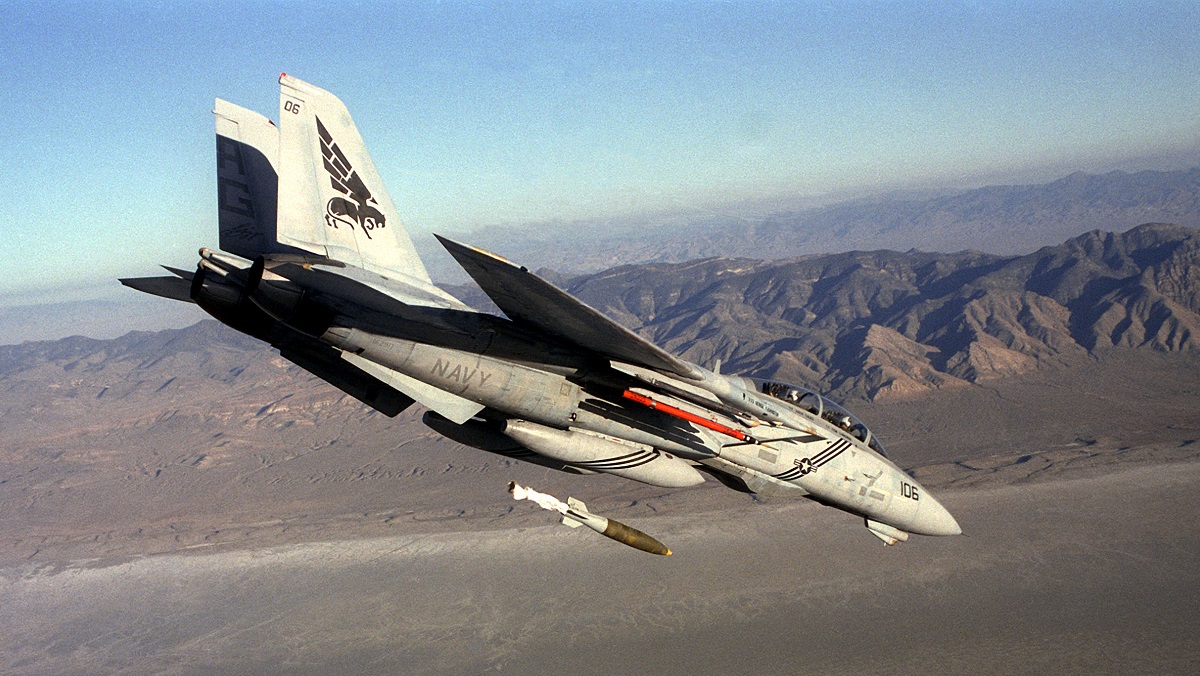 OVERVIEW: The Grumman F-14 Tomcat is a fourth-generation, supersonic, twinjet, two-seat, variable-sweep wing fighter aircraft. The Tomcat was developed for the United States Navy's Naval Fighter Experimental (VFX) program following the collapse of the F-111B project. The F-14 was the first of the American teen-series fighters, which were designed incorporating the experience of air combat against MiG fighters during the Vietnam War.

The F-14 first flew in December 1970 and made its first deployment in 1974 with the U.S. Navy aboard USS Enterprise (CVN-65), replacing the McDonnell Douglas F-4 Phantom II. The F-14 served as the U.S. Navy's primary maritime air superiority fighter, fleet defense interceptor and tactical reconnaissance platform. In the 1990s, it added the Low Altitude Navigation and Targeting Infrared for Night (LANTIRN) pod system and began performing precision ground-attack missions.

The Tomcat was retired from the U.S. Navy's active fleet on 22 September 2006, having been supplanted by the Boeing F/A-18E and F Super Hornets.

DETAILS: The F-14 Tomcat was designed as both an air superiority fighter and a long-range naval interceptor. The F-14 has a two-seat cockpit with a bubble canopy that affords all-round visibility. It features variable geometry wings that swing automatically during flight. For high-speed intercept, they are swept back and they swing forward for lower speed flight. It was designed to improve on the F-4 Phantom's air combat performance in most respects.

The F-14's fuselage and wings allow it to climb faster than the F-4, while the twin-tail arrangement offers better stability. The F-14 is equipped with an internal 20 mm M61 Vulcan Gatling cannon mounted on the left side, and can carry AIM-54 Phoenix, AIM-7 Sparrow, and AIM-9 Sidewinder anti-aircraft missiles. The twin engines are housed in nacelles, spaced apart by 1 to 3 ft (0.30 to 0.91 m). The flat area of the fuselage between the nacelles is used to contain fuel and avionics systems such as the wing-sweep mechanism and flight controls, and the underside used to carry the F-14's complement of Phoenix or Sparrow missiles, or assorted bombs. By itself, the fuselage provides approximately 40 to 60 percent of the F-14's aerodynamic lifting surface depending on the wing sweep position.