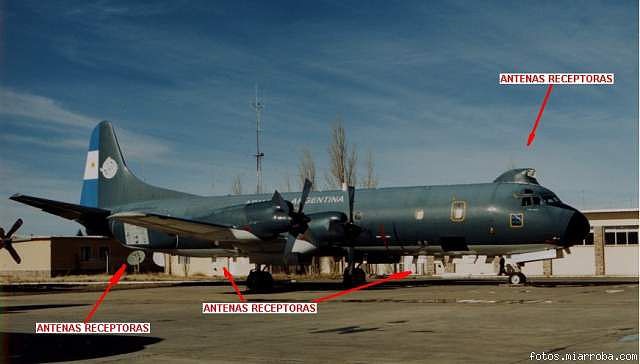 The Lockheed L-188 Electra is an American turboprop airliner built by Lockheed. First flying in 1957, it was the first large turboprop airliner built in the United States. Initial sales were good, but after two fatal crashes led to expensive modifications to fix a design defect, no more were ordered. However, with its unique, high power to weight ratio, huge propellers and very short wings (resulting in the majority of the wingspan being enveloped in propwash), large Fowler flaps which significantly increased effective wing area when extended, and four engine design, the airplane had airfield performance capabilities unmatched by many jet transport aircraft today -- particularly on short runways and high field elevations. The type was soon replaced by turbojets and many were modified as freighters; the type is still used in various roles into the 21st century. The airframe was also used as the basis for the Lockheed P-3 Orion maritime patrol aircraft.
In 1973, the Argentine Navy bought three Electras equipped with cargo doors. These were used during the "Dirty War" to toss political prisoners into the Rio de La Plata, in the infamous death flights. The Electras were also used in transport duties during the Falklands War in 1982.
In 1983, after the retirement of its last SP-2H Neptunes the Argentine Navy bought further civilian Electra airframes, modified several for maritime patrol, and widely used them until their replacement by P-3s in 1994. One of the Argentine Navy's Electras, known locally as L-188W Electron (for electronic warfare), is preserved at the Argentine Naval Aviation Museum (MUAN) at Bahía Blanca.
http://en.wikipedia.org/wiki/Lockheed_L-188_Electra