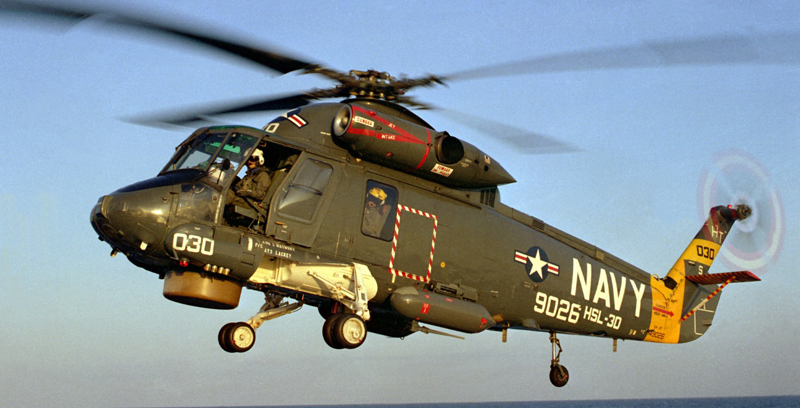 OVERVIEW: The SH-2 Seasprite is a multi-mission helicopter featuring dual General Electric T700 engines, which give the aircraft true single engine capability throughout any mission configuration and profile. Standard mission equipment in the US Navy configuration includes: the AN/UYS-503 acoustic data processor and a state-of-the-art sonobuoy processor that incorporates the best features of any Undersea Warfare (USW) equipment in the world today.

Tactical data from the radar, Electronic Support Measures (ESM), acoustic processors, and Magnetic Anomaly Detector (MAD) are integrated through the MIL-STD 1553B data bus and displayed on the AN/ASN-150 tactical navigation set. This allows the crew to function simultaneously in a multi-mission battle space scenario including USW, Anti-Surface Warfare (ASuW), Anti-Ship Surveillance and Targeting (ASST), as well as utility functions such as search and rescue, vertical replenishment, and medical evacuation.

DETAILS: The maximum gross weight of the aircraft - 13,500 pounds - gives this medium weight helicopter the unique ability to operate from the smallest combatants yet carry payloads that enable diverse mission loads and extended times on station. Options include: a dipping sonar (offered in the Egyptian configuration), Forward Looking Infra-Red (FLIR), missile systems, and helicopter self-protection equipment such as jammers, missile warning equipment, and chaff systems. The US Navy incorporated Magic Lantern, a laser-based mine detection system, in 1996.

A product of Kaman Aerospace Corporation of Bloomfield, CT, the SH-2G Super SeaSprite was originally developed in the mid-1950s as a shipboard utility helicopter for the Navy. Utilizing a unique blade flap design on the main rotors, aerodynamic action of the flaps allows the pilot to fly without the aid of hydraulic assistance. The SH-2G is configured specifically to respond to the Light Airborne Multi-Purpose System (LAMPS) requirement of the United States Navy. The LAMPS concept extends the search and attack capabilities of carrier and convoy escort vessels over the horizon through the use of radar/ESM equipped helicopters.

The original SH-2 Seasprite took off on July 2, 1959, and the US Navy over the years ordered various variants. Work on the SH-2G began in the 1980s, and an engine testbed for the T700 engines, which replace the T58, flew in April 1985. A prototype with full avionics fit followed on 28. December 1989. First new production SG-2G was accepted into service with the US Navy Reserve Squadron HSL-84 at NAS North Island (San Diego) on February 25, 1993. The Super Seasprites are used for long-range surveillance, anti-surface warfare, anti-submarine warfare, mine warfare countermeasures, SAR and utility missions.

The first foreign sale of th SH-2G was announced in March 1995, when Egypt ordered 10 helicopters (all remanufactured from SH-2Fs). Official roll-out of the first SH-2G(E) was on October 21, 1997, although testing had been completed earlier. The first three machines will be used for flight training at Pensacola NAS before in-country delivery in April 1998. The helicopters will fly from frigates. Other international customers for the SH-2G are Australia (11) and New Zealand (4), which selected the Kaman helicopter after fierce competitions in January an March 1997 respectively. Deliveries to Australia are to start in the year 2001, and New Zealand will get its Super Seasprites from June 2000 for operation aboard ANZAC and Leander Class frigates. As an interim measure, SH-2Fs were delivered to the New Zealand Navy in 1997/98.